Wonderville is a new bar, arcade, and event space in Brooklyn. Nostalgia-driven arcade bars are making a comeback all around the States but what makes Wonderville special is its selection of contemporary indie games and handcrafted cabinets. As a director of LIKELIKE, I was asked to contribute to their (successful) Kickstarter campaign, which included a game bundle among the rewards. I thought it was a good excuse to make a little arcade game that has been sitting in my todo list for years. 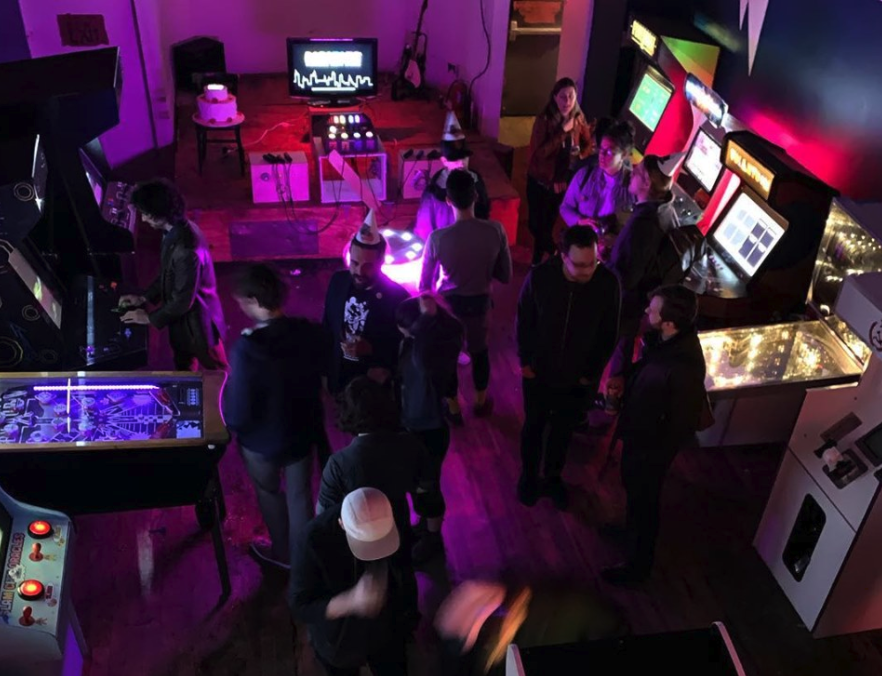 Three Sided Football Arcade is the first videogame adaptation of the namesake sport. It’s a local competitive game for three human players – the AIs control the two teammates but there’s no one or two player mode. The team that concedes the least goals wins, the goal scored are accounted only in case of a tie.

The original soccer variant was conceived by Danish Situationist Asger Jorn in 1964. 3SF was meant to explain his concept of Triolectics, a detournement of the Hegelo-Marxist dialectics. Jorn’s Triolectical Materialism was presented in a pamphlet titled “De la méthode triolectique dans ses applications en situlogie générale” and published by the Scandinavian Institute of Comparative Vandalism. The booklet has never been translated in English, and the few pages available on the internet are perplexing to say the least.

And yet, the idea of an anarchist football played by three opposing teams in an elegant hexagonal pitch survived the oblivion and was occasionally put into practice by artists and neo-situationists in the ’90s. Today there are a few clubs and tournaments dedicated to 3SF, and even FIFA took notice.

Regardless of what Jorn originally intended to argue, I can see the value of an abstract model of interpretation based on a ternary system. Way too often complex issues are reduced to a binary opposition: us vs them, ingroup vs outgroup, Democrats vs Republicans, Capitalism vs Communism (at least during the Cold War). Sports continuously dramatize binary conflicts and often provide language and metaphors that are applied to other fields. Claiming that all conflicts involve three adversaries is obviously preposterous, but it’s only with the introduction of a third player that phenomena like tactical alliances and betrayals can occur. It’s the minimum conceptual model you have to use in order to make sense of Putin’s complex relationship with the Trump administration, or of the DNC’s moves against Bernie Sanders.

Three Sided Football Arcade might be a bit too fast and frantic to generate the complex social dynamics of a board game like Risk, but it’s still fun to see how the most popular sport in the world is transformed by the addition of fluid alliances, opportunism, and the occasional kingmaking.

Three Sided Football Arcade is a Wonderville bundle exclusive for the time being, but it will be presented at LIKELIKE in August and perhaps at a couple of game festivals and events.