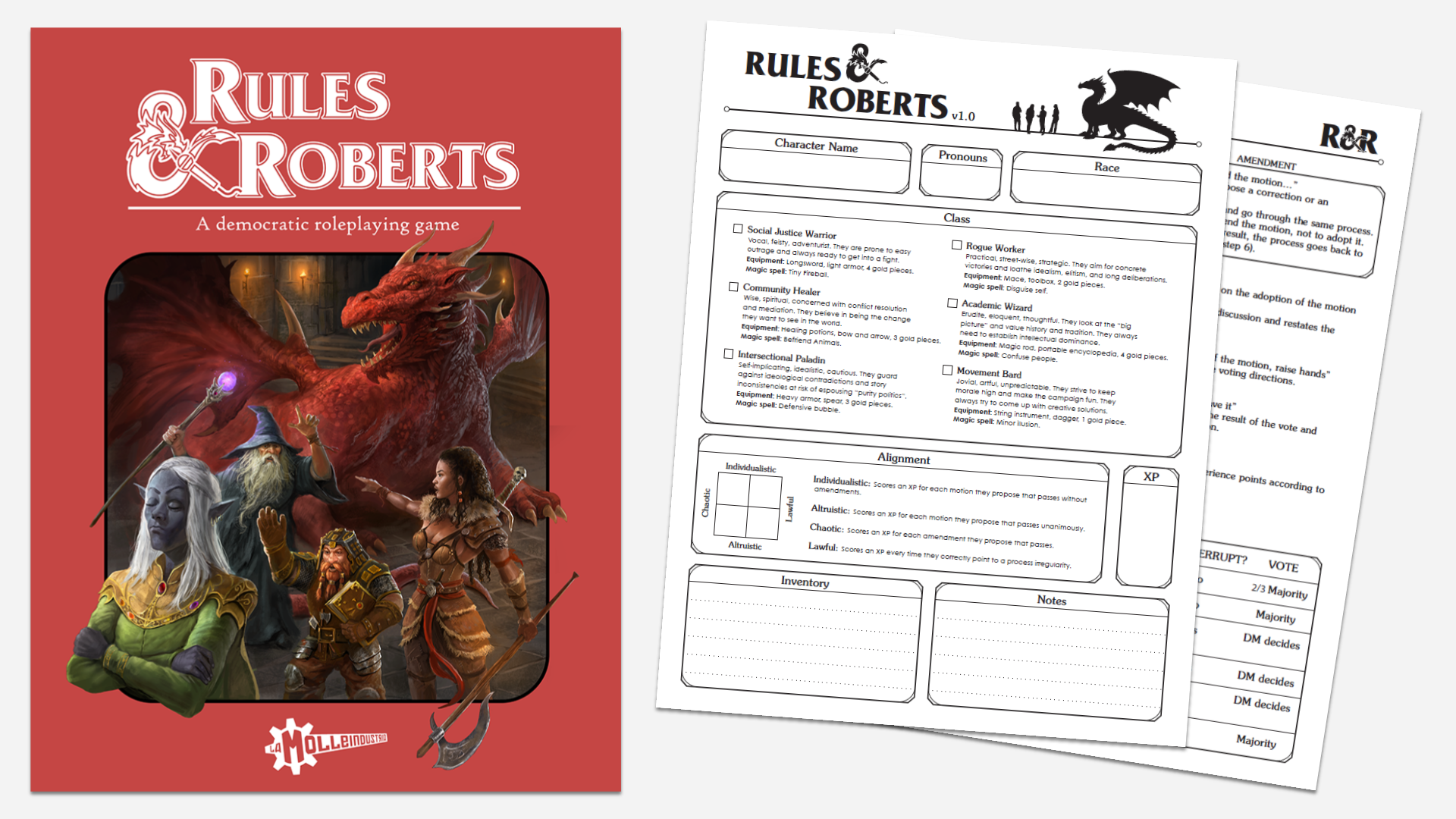 Even if it’s a spoof of Dungeons & Dragons, R&R is more of a storytelling game: it’s light on mechanics, there are no dice rolls or complex stats, and the Dungeon Master doesn’t have to prepare any material nor read lengthy manuals.

The players act as a group of adventures determined to bring justice, peace and freedom in a high fantasy universe. Being a radically democratic group, all of their actions are methodically debated and agreed upon. The starter campaigns have not-so-subtle social justice allegories and the whole ruleset is meant to temper some of the most regressive aspects of fantasy settings.

The main gameplay feature is related to decision making. Instead of individualistically declaring their actions, or planning the next move informally, each player proposes motions that are discussed, amended, and approved by the whole group following the Robert’s Rules of Order process. Unlike traditional tabletop roleplaying games, Rules & Roberts can be effectively played by any number of people.
Here’s a gameplay sample:

Dungeon Master (DM): After traversing the Swamp of Sadness you arrive, still teary eyed, to the entrance of a dungeon. It’s located amidst overgrown ruins. Riotous cries come from deep inside, a stench of neglect wafts to the surface. Down the road to the west you see the smoking chimneys of a small village.
Jason: Does the village look human?
DM: It’s certainly human-made architecture.
Kate: Does my character, being an academic wizard, know anything about the dungeon?
DM: You recall reading about this place. It used to be a magnificent castle, but after an economic downturn it was abandoned and fell into disrepair. Only the underground dungeons are still used as prisons. The crisis likely increased crime and incarceration.
Michael (playing as Aroris): I want to explore the dungeon!
DM: That would be an action to be introduced as a motion.
Michael (playing as Aroris): I move to enter the dungeon.
Laura (playing as Xyrra): Second.
DM: It is moved that the party enters the dungeon. Aroris, you can start the debate.
Michael (playing as Aroris): First, I don’t like prisons and I want to make sure nobody is unjustly incarcerated here. Second, dungeons often contain treasures and exciting adventures.
Jason (playing as Jasonir): I agree but I’d rather stop by the village first. We will check with the local community and maybe find some proper equipment.
Laura (playing as Xyrra): The cries and the lack of guards make me think there is some trouble happening now.
Kate (playing as Kelfir): I move to amend the motion. We enter the dungeon and only look for a guard or a prisoner to talk to.
Laura (playing as Xyrra): Second.
DM: Are there any objections to the amendment? …The amendment carries. The motion is now to enter the dungeon with the sole intention of talking to its inhabitants. We are back to the discussion.
Jason (playing as Jasonir): We all know that once we enter it, we’ll run into troubles. It’s problematic to parachute into a community, trying to bring justice without having any clue.
DM: If there aren’t any more contributions we can close the debate. The question is on the adoption of the motion to enter the dungeon and talk with somebody.
Those in favor of the motion, raise hands. Three.
Those opposed, raise hands. One.
You may score your Experience Points.
The dungeon is an unlit tunnel of about ten by ten feet. Nobody is around and the turmoil is getting louder. Your eyes are still adjusting to the dark when you hear a rattling noise followed by a loud thump. A heavy metal portcullis has been shut behind you.
Jason (playing as Jasonir): I told you.
Laura (playing as Xyrra): What’s a portcullis? 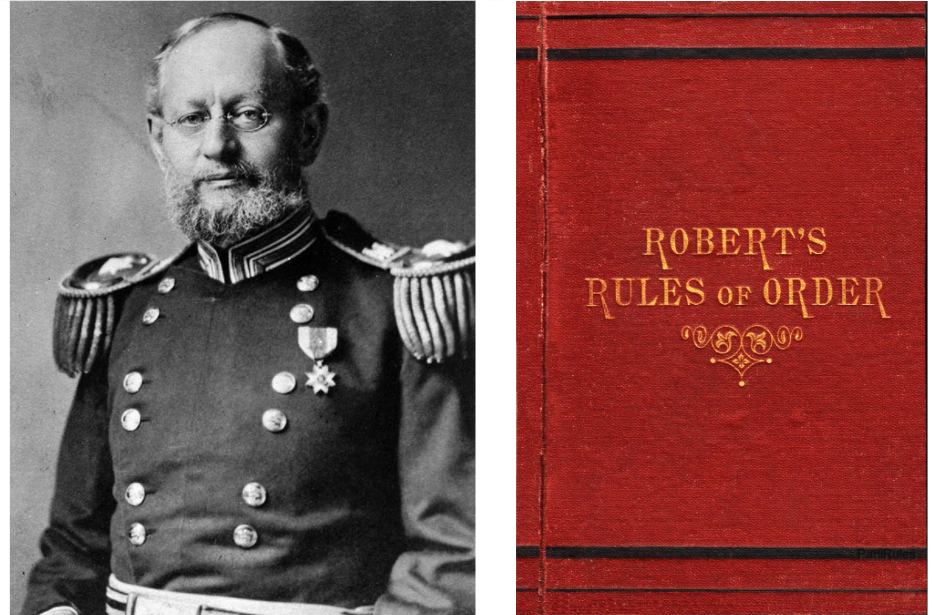 Robert’s Rules of Order is a manual establishing parliamentary procedures for large assemblies. It’s used by nonprofit associations, political groups, academic bodies, church groups, and trade unions, primarily in the United States.
In my experience, it works reasonably well as a system to speak in turns and structure discussions in large meetings; but being originally conceived in the late 19th century, it may appear formulaic and inaccessible to the uninitiated. People with less experience with the procedures may feel inhibited to participate; malicious individuals may use their knowledge to stall a process; less engaged members may see the whole deal as unnecessarily bureaucratic.

Rules & Roberts (the game) embraces the messiness of democratic decision making and allows mischievous lawyering, or accidental self-sabotage. It provides rather flexible rules to determine when a motion has to be proposed, and how precise it’s supposed to be. A process may spiral into recursive Kafkian amendments about the most insignificant details, or consensus may be reached swiftly for fear of lengthy discussions. Ultimately, the game is about negotiating the overhead of any democratic process, and getting acquainted to people’s different attitudes toward rule systems.

R&R started as a joke during a particularly convoluted DSA meeting, and it’s meant to be a bit of a cursed artifact to both behold, dread, and never EVER play. But it is a functioning educational game: players do get better at following Robert’s Rules of Order. I don’t know if games can actually teach anything about the world, but by playing games you certainly learn their rules. So if the rules happen to be the educational content, there you go!

Rules & Roberts is available on itch.io as name your own price