TweeVee is an engine for interactive videos built in javascript. You can create a branching movie in the style of Black Mirror: Bandersnatch starting from Twee files exported from the popular hypertext editor Twine.

TweeVee was created for a LIKELIKE livestream showcasing four interactive movies, from the pioneering Kinoautomat to the wild YouTube game The Immoral Ms. Conduct.
It was a good excuse to restore the first (American) interactive movie I’m Your Man in all of its branching splendor, and make a new piece remixing very pixelated footage from an old CD-ROM. 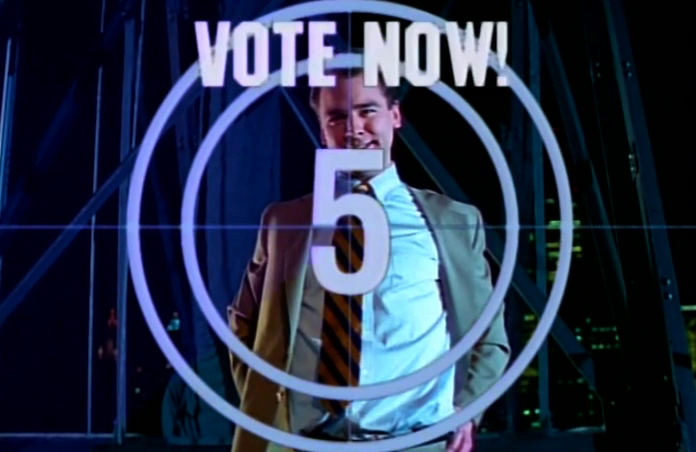 I’m Your Man is a 1992 short film created to showcase Loews Theatres’ interactive cinema technology. Audiences used seat-mounted joysticks to vote between three options at various point of the movie.

Although the format ultimately failed due to lack of marketing and poor audience reception, I’m Your Man was released on DVD in 1998 as part of a second attempt at interactive video.

The use of unconventional menus makes the DVD almost impossible to experience on modern computers.

In 1996, Knowledge Adventure and Dreamworks published Steven Spielberg’s Director’s Chair, an ambitious game simulating the process of moviemaking. The centerpiece of the title was a short film with an all star cast directed by Steven Spielberg himself.
Since the player could take some crucial decisions in the pre-production phase, the film was shot with different plot points and tonal variants.

We salvaged the game’s raw footage and reorganized it as a real time interactive movie experience. Be prepared to choose your own path through this obscure bit of film and video game history…