A couple of months ago, Stephen Totilo from Kotaku read some angry tweets of mine regarding the teaser campaign for Call of Duty: Black Ops 2. Stephen asked me if I was interested in expanding my 140 character long rants into a 400-600 hundred word article. I gave him 1600 words. I republish the entire article here:

The future is black, announces the trailer for Call of Duty: Black Ops 2.
The next iteration of the popular first person shooter hardly needs any marketing campaign: immediately after the official announcement, the gaming press diligently started to operate as an extension of Activision’s PR department. Small and big media scrambled to produce the most comprehensive list of features, talking polygons and frame rates, revealing plot fragments, speculating on new gameplay additions that may or may not rejuvenate the trite shooting genre.

Given the predicable hype, it is surprising to see among the promotional material a serious, high production value “documentary” about 21st century warfare, touching upon cyberterrorism, robotics and counter-insurgency.
The 6-part video – available here in “interactive” form or here in sequential form – prominently features military commentator P.W. Singer and Oliver North, the key figure of the Iran-Contra scandal that nearly brought down the Reagan administration in the mid 80s.

Allow me a digression. The Iran-Contra affair is one of those rare cases in Cold War history where it’s absolutely clear who the bad guys are. Oliver North, at the time working for the National Security Council, was involved in the clandestine sale of weapons to Iran (a rather common practice during the Cold War’s proxy conflicts). The proceeds from the sales were then illegally diverted to finance the Contras, a network of CIA-trained guerrilla groups, who opposed the democratically elected government of Nicaragua. Contras were notorious for their human right abuses such as murder, torture, rape and executions of civilians. They also funded themselves through drug trafficking and it’s been alleged that the CIA was supporting, or at least, tolerating these activities. These last allegations were disproved after an investigation led by, well… the CIA.
The story of how Oliver North went from being a convicted felon for these activities, to Republican candidate for the Senate, best selling author, news commentator for Fox News and eventually testimonial/media-stuntman for Activision, is a kind of twisted version of the American Dream that I’m not going to tell.

Back to the trailer: it’s quite unusual to see a major game developer contextualizing a title in relation to current, hotly debated issues; that is, avoiding the notorious “it’s just a game” stance and acknowledging that military-themed games are part of a larger discourse around war. It’s also somewhat gutsy to take a clear political position by hiring a figure like North. I personally would love to see more game companies taking their roles as cultural producers this seriously.

As it turns out, it’s hard to sell a shooter about black operations without glorifying the real black operations. The “documentary” feels like a polished piece of propaganda that may have come straight out of the Department of Defense.
I’m talking about a rather new kind of propaganda here. The post-9/11 triumphalist rhetoric of America’s Army, Kuma War or Full Spectrum Warrior (just to mention other games set in contemporary or near-future scenarios) can only sound awkward after the epic failures of Afghanistan and Iraq.
Hence, the militaristic fable has to assume a different tone – in this case, a dark, apocalyptic – and envision scenarios of unconceivable horror to strike an audience desensitized by a decade of continuous war. As Oliver North puts it in the trailer: “I don’t think the average American grasps how violent war is about to become”.

The bulk of the narrative is provided by P.W. Singer, a prominent military expert and fortunate choice for this type of contextualization. His book Wired for War is an outstanding account of robotic warfare (and, by the way, the main source and inspiration for my latest game Unmanned). The treatise describes the state of the art of unmanned systems and examines the political, ethical and legal issues emerging from this ongoing technological revolution. It inevitably raises difficult questions: How our perception of the frontline changes when we can remotely control a UAV from home? How important is the risk of losing human lives when waging a war? Will robots make us more inclined to use violence in resolution of conflicts? Who is responsible when an autonomous machine kills a human? The personnel who deployed it? The commander of the operation? The engineer? The programmer who made the software?
Of course, all these questions are not even hinted at in the Black Ops 2 “documentary”. Singer is simply used to tell us that “the future is here” and that robots may have dangerous bugs, while North spins his Fox News-style terror scenario. 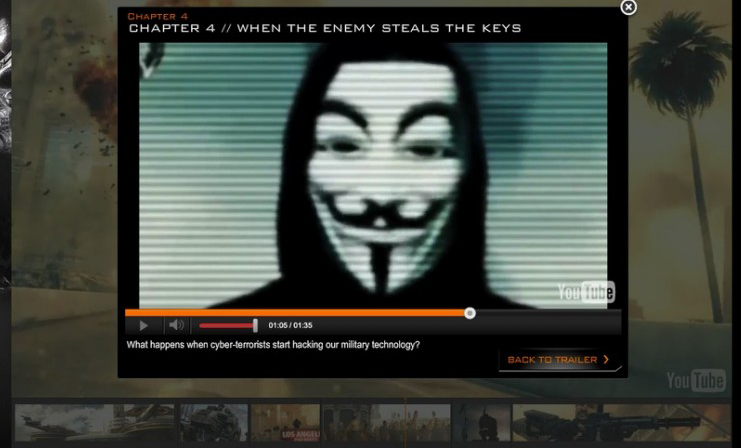 Oliver North’s nightmare seems to coincide with the premise of the game: in a imminent future, a supervillain (possibly affiliated with Anonymous) is able to hijack an army of unmanned war machines and attack Los Angeles.
In the game, or in North’s vision (at this point it’s hard to tell) the future of warfare is with black ops. Clandestine Special Forces can be deployed anywhere, in no time, with the most sophisticated weaponry to confront a diffused, unfathomable enemy.
Don’t understand the connection between cyberterrorism and covert operations? Don’t worry, that’s nothing but a non sequitur that serves the purpose of introducing the main themes of Black Ops 2. Nevertheless, this kind of nonsense, especially if repeated ad nauseam in news media and pop culture, contributes to the way we think about conflicts and future threats.

I believe there is a twofold process transforming the way we perceive war. On one hand we have a normalization of images of war: in media, in electronic entertainment, even in viral videos showing robotic Big Dogs or other DARPA-funded marvels. On the other hand, we have a massive deployment of “strategies of separation” such as unmanned aerial vehicles or undercover operations that work together to make the material reality of war as distant as possible from our daily lives.
Black Ops 2 will probably end up contributing to both sides of this equation by trivializing war and celebrating the culture of secrecy at the same time.

You may ask: what’s wrong with celebrating black operations anyway?
In the Ramboesque universe of Call of Duty, black ops are presented as an elite force type of operations, carried out in secrecy by modern ninjas. But in reality, what makes certain operations “black” is not that they go undetected by enemy forces – after all, most of military engagements are meant to surprise or deceive the opponent. The peculiarity of black operations is of being untraceable and deniable by the very institutions which finance and conduct them. This secrecy is desirable whenever the operations, if done overtly, would cause popular uproar, diplomatic crisis or legal troubles. It allows the perpetrators to bypass public scrutiny, democratic oversight and the Laws of War, a complex system of liability under which the “proper” military must operate.
Real-world black operations are often indistinguishable from terrorism. The 1985 Beirut car bombing, in which American and British intelligences failed in their attempt to assassinate an Islamic cleric, resulted in the deaths of about 60 civilians, including children leaving school. Take note Activision and Treyarch: it sounds like a fun mission.
Examples of contemporary black operations include the murder of several Iranian nuclear scientists, the virus Stuxnet, the undeclared drone wars in Pakistan, Yemen and Somalia, and the Extraordinary Rendition Program that involves the kidnapping of suspected terrorists and their illegal detention and torture in a network of secret prisons operated by the CIA.

The most paradoxical aspect of black operations is that they are mostly invisible to the public opinion here in the West, but not in the countries where these operations take place. Venezuelan people know and remember vividly that the 2002 coup against their democratically elected government was funded by Washington. For the families and friends of the thousands of victims of drone strikes in Pakistan, those operations are not that secret anymore. The news that U.S. drones are deliberately targeting rescuers and funerals may be of secondary importance here, but abroad, it fuels an ever growing anti-Western sentiment.

In the West, we live with constant cognitive dissonance because these practices clearly conflict with our supposed moral high ground and the official mission of “exporting democracy”. We deal with it by quickly forgetting troubling events, by buying into sanitized stories such as the ones presented by videogames, or by crafting elaborate echo chambers where the only news stories we are exposed to are ones that relate with our hobbies and interests.

It’s entirely possible that Black Ops 2 may end up telling a fascinating story, the story of a country that achieved such a complete military supremacy that the only thing it fears is its own arsenal. It could also attempt new forms of gameplay to describe the complexities of asymmetrical warfare and the vaporous world of cyberterrorism, but I suspect we’ll end up with a refinement of the same shooter, this time with robotic enemies as targets.

This coming November, you may be one of the millions who will purchase Call of Duty: Black Ops 2. Before you start fantasizing about a Los Angeles under drone attack and the undercover soldiers who will save us all, you may want to think about the horrifying history of undercover operations and the actuality of drone wars today.

The future may indeed be black, but the present isn’t bright either.

P.S. If you want to see a real documentary about the robotics revolution in warfare I recommend Remote Control War produced by the CBC.
There are many good films about United States’ foreign policy in Latin America. A recent one is John Pilger’s The War on Democracy, available on Netflix. This topic is also central to the seminal educational/strategy game Hidden Agenda by Jim Gasperini.