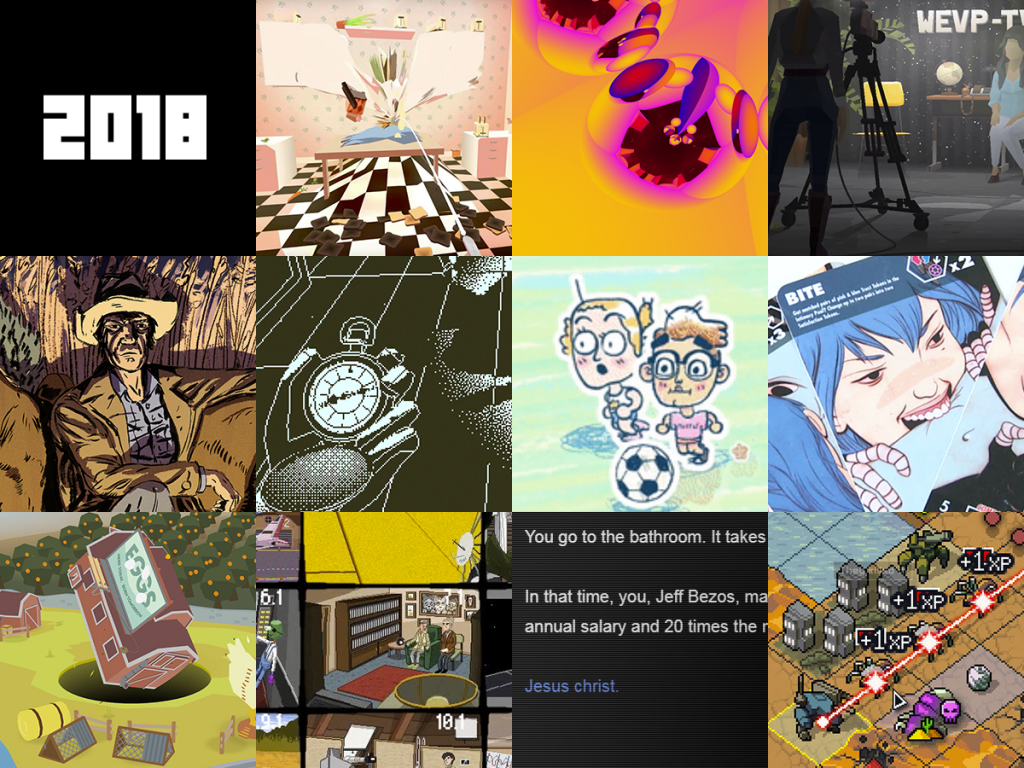 This year I played more indie games than usual in the process of curating shows for LIKELIKE. And yet, I had some trouble finding my usual top picks in terms of novelty, artistic intent, and social engagement. These indiepocalyptic times are giving us an embarrassment of releases but the most popular development strategy seems to be: work within established genres, put a lot of effort into visual polish (probably a result of increasing visual social media), and often just… make games punishingly hard (which I guess yields more play hours in face of limited resources?). At this point I served my time jumping on platforms and getting my ass kicked over and over, so I apologize for some notable absences. These highlights definitely fall on the relaxed side.

In no particular order: 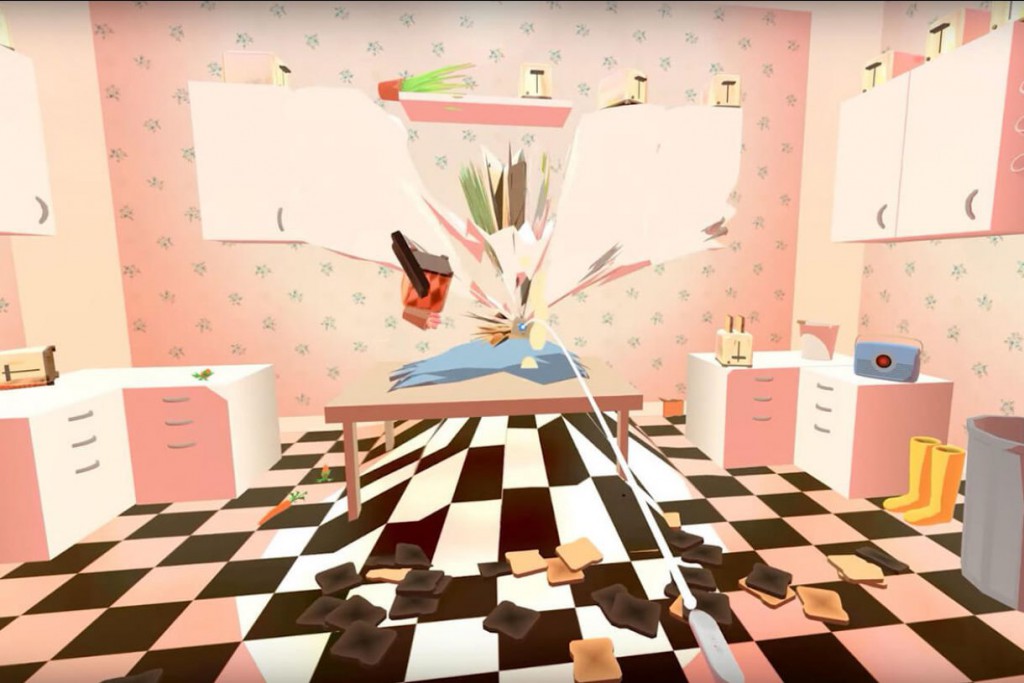 Remember Virtual Reality? Back in the mid-10s the idea of people playing games with expensive, barf-inducing monitors strapped on their faces seemed so absurd that many of the works in this form resorted to self-referential humor. Like Job Simulator or Accounting, Virtual Virtual Reality puts you in the shoes of a worker of the future, assigning you trivial object manipulation tasks across different virtual realities. Like Giant Cop or The Stanley Parable, it entices you to disobey diegetic orders and throw a wrench in its gears. But this is where the analogies end: VVR is both more focused in its social critique and more unhinged in its delivery than anything I played this year. The visual style, writing, voice acting, and pacing are impeccable. Please dust off your headset while it still works and experience this underrated piece.

*Technically VVR came out in 2017, but I believe it was an exclusive for some VR thing I don’t even care to google.

The Return of the Obra Dinn 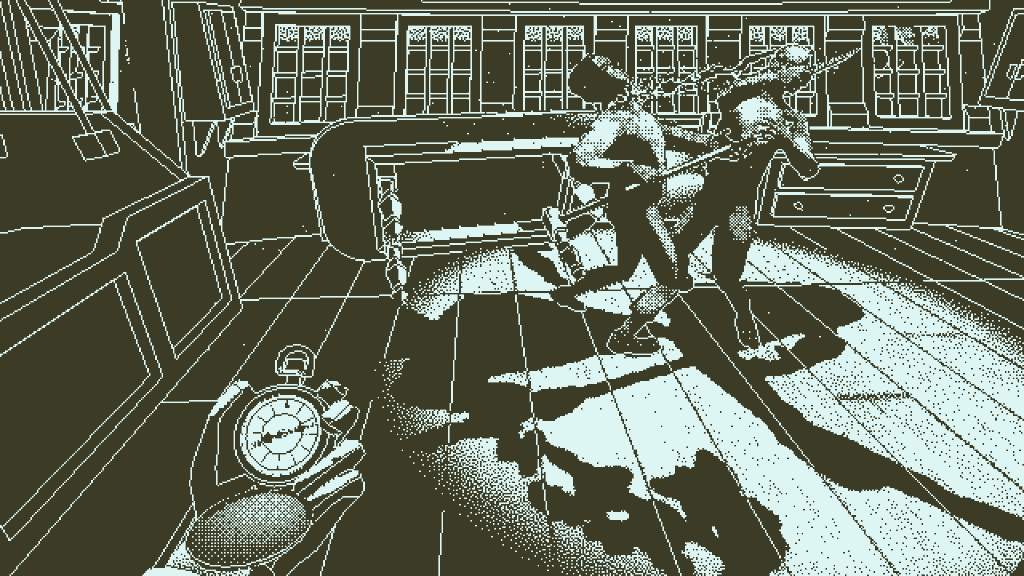 The Return of the Obra Dinn is a narrative-mystery-puzzle game from Lucas Pope, the creator of the acclaimed Papers, Please. The setting is a trade ship in the year 1803; you are some sort of insurance detective who has to figure out what happened to each member of the missing crew. More notably, you are endowed with occult powers that allow you to witness the last moment of  a person’s life, and from there, leap to other people deaths. The mechanics are at first a bit convoluted, and the plot is preposterous, but what really matters is the intricate web of clues and revelations that connect the characters’ fates.

Like Pope’s previous works, Obra Dinn leaves a core part of the gameplay unformalized, outside of the algorithmic domain. It generally feels more like reading a “whodunnit” pulp novel than playing a game, and it’s best played in company since the hints are easy to miss and there’s a lot to keep track of. Sometimes the deduction process involves guessing accents, clothings styles, or relying on real world knowledge, sometimes it’s about gaming the validation system. Lucas Pope single-handedly took care of every aspect of the production except for the voice acting: from the sophisticated 1-bit dithering filter to the Enya-meets-pirate-song soundtrack, that in itself is quite a feat. 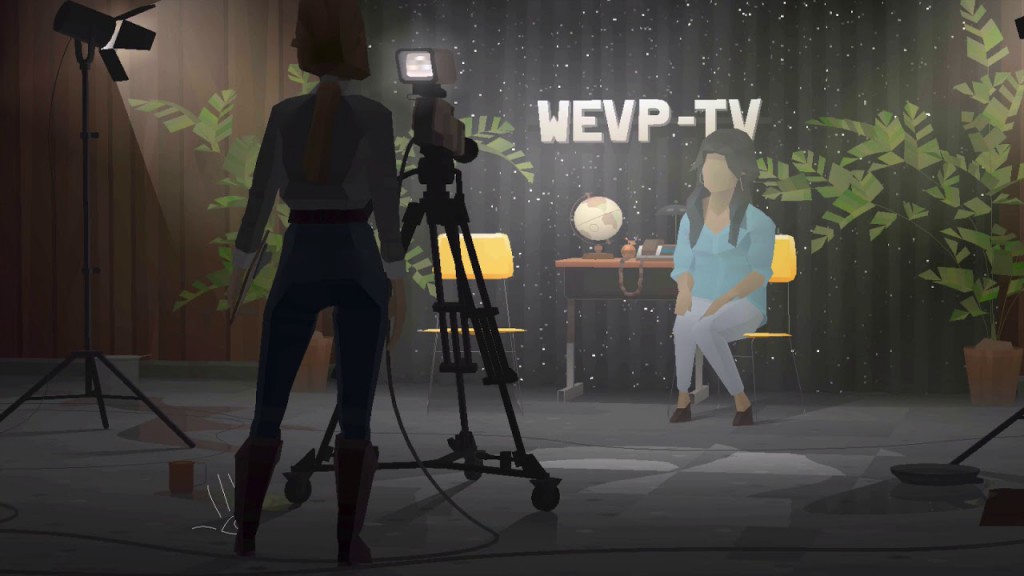 As if producing more and more ambitious chapters of Kentucky Route Zero wasn’t enough, the folks at Cardboard Computer managed to put out a few standalone interludes between each major release. These short experimental pieces expand their Appalachian gothic world and try formats that wouldn’t fit with the main corpus: a choose-your-own-adventure via phone, a VR experience in which you embody an actor of an experimental play, and an exhibition of impossible art.

Un Pueblo De Nada was dropped without much fanfare in January, and it’s comprised of a 30 minute live-action video and a downloadable game. The video, which you should watch first, is a recording of a fictional public access program. It’s cringeworthy, occasionally humorous, sometimes poetic, and thoroughly bizzarre. The interactive (albeit linear) component lets you experience the same transmission from the eyes of the camera person. You have to run the program smoothly while exploring the haunted TV station though a wonderful hand-drawn graphic user interface. Un Pueblo De Nada plays with notions of real time, intertextuality, game adaptation, analog vs digital and much more. It’s an ode to the comical, desperate act of making art in a world of decay. I can’t think of a game doing anything even remotely similar.

Consentacle is a two player card game about human-alien intercourse and mutual trust. Through a simple resource economy the two players try to guess each other’s desires, with little or no verbal communication. Representing sex and romance through formal game rules typically ends in disaster, but Naomi Clark is a veteran game designer and a deep thinker, I’m not surpised she managed to pull it off. The illustrations by James Harvey are fantastic. 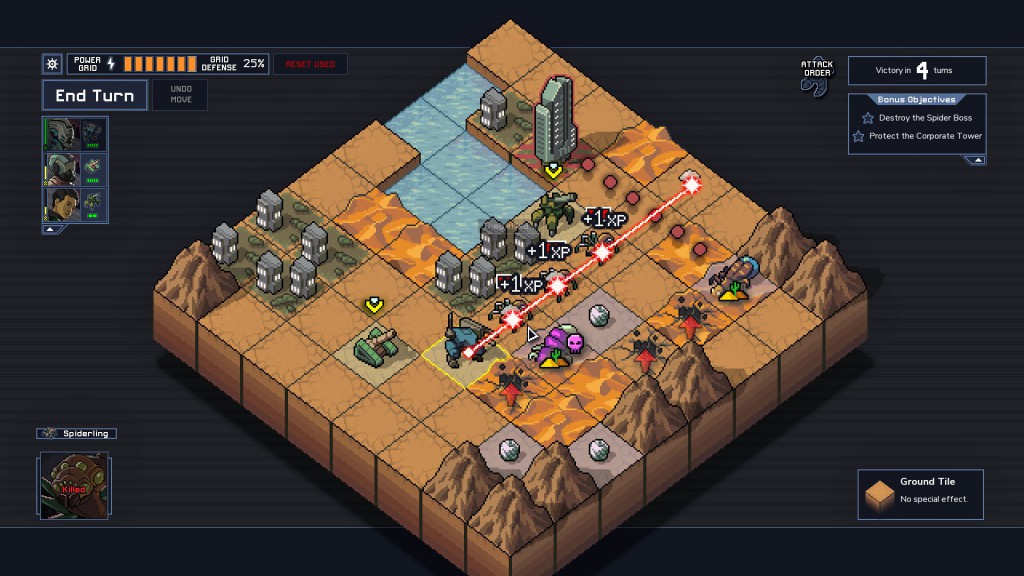 I wanted to add to this list a title with some gameplay depth and replayability. Into the Breach was the obvious choice. The follow up to FTL is a turn-based-strategy game in which you fight giant monsters with giant robots. Such premise may conjure images from the delightfully trashy Pacific Rim, but Subset Games went for a much less bombastic style, deploying a cute pixel art style on a chessboard-sized terrain. Into the Breach does feel a bit like chess sometimes despite its asymmetry, emergence, and constrained randomness.

What makes it special is its philosophy of damage reduction. Your main goal is to defend human settlements until the monsters retreat. You are always overpowered and outnumbered so you often have to make painful decisions about what, or who, to sacrifice. At times you have to opt for oblique defensive moves instead of direct attacks, or miss a power-up to occupy a strategic position, and so on. The short sessions and the relatively simple rules make Into the Breach an accessible turn-based-strategy game for people who are not into the genre. 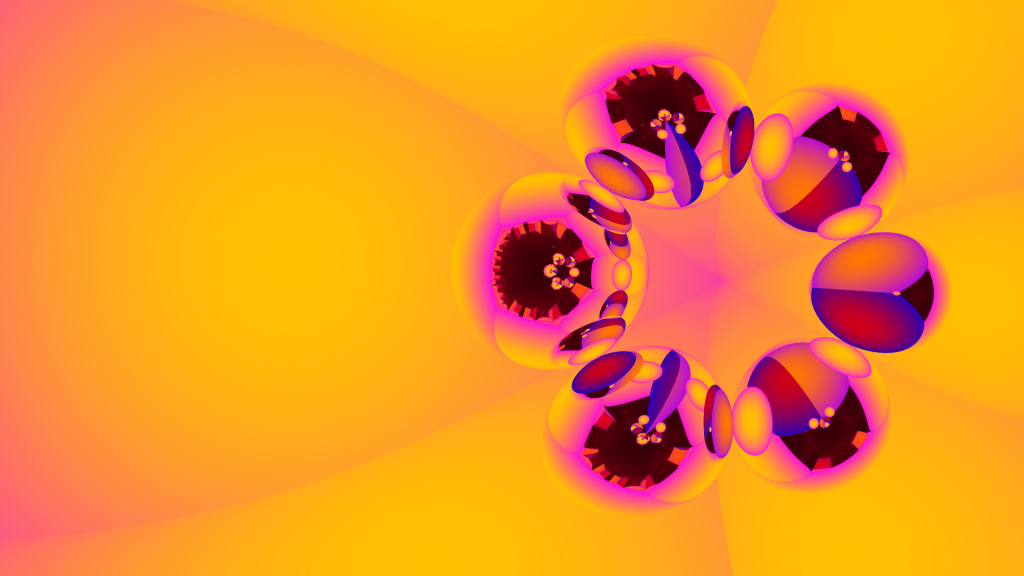 Playing Mirror Drop feels like experiencing 3D space for the first time. It also feels like being high as hell. Its core is a puzzle in which you move a sphere in a zero gravity environment by turning magnetic fields on and off. Its presentation is an extravaganza of raytraced reflections that multiply, confound, fractalize the architecture you have to negotiate. Both aspects are masterfully executed: the puzzles are always fresh and challenging; the visuals kept blowing my mind over and over; the lush, chill music perfectly complements the experience.

Mirror Drop is a scandalously overlooked game that will make you feel alien, and make your graphics card scream with joy – unfortunately a high-end gaming computer is required.

Do not Feed the Monkeys 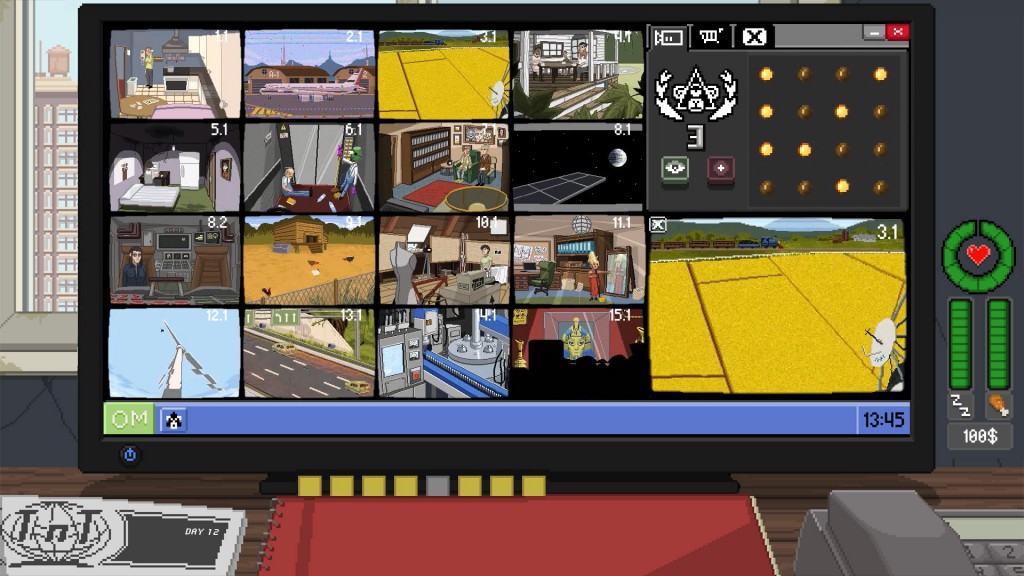 Recently there have been a few games thematizing surveillance and its ethical implications, but I played none that were as compelling as this one. In Do not Feed the Monkeys you are a subscriber of a crowdsourced surveillance service. You spend a lot of time looking at video feeds from hidden (or hacked) cameras. You listen to conversations, take notes, trying to uncover embarrassing secrets. You are not supposed to “feed the monkeys” that is to meddle with the surveilled people’s life, but the temptation to use your power to help them, punish them, or blackmail them for a few bucks is just too strong.

The spying app is presented as software within the game. In your “real life” you have to take care of basic upkeep functions such as eating, sleeping, paying your bills or dealing with random people knocking at the door. The world outside your decrepit apartment is outlined through hilarious news clips and random websites: precariousness and corruption are out of control, global warming looms, tech companies are garbage etc… a very slight caricature of our world circa 2018.

Do not Feed the Monkeys is a surprisingly frantic game that involves logical deduction, time management, and harrowing moral dilemmas. The morality play often subverts the good/evil binary with unexpected outcomes and a certain flexibility in the paths to success. Despite the cartoonish surface and silly humor, this game dares to touch upon rather dark themes and does so brilliantly.

WTWTLW is a sprawling narrative game set on the backdrop of the Great Recession. You play as a vagabond collecting and retelling stories around campfires and in towns all around the United States. Some recurring characters, scripted by a dream-team of game writers, will ask you about certain type of stories, which you can use as a kind of currency to establish deeper relationships. Only a few of the 200 or so magical realist tales are truly memorable, but it’s a delight to encounter them again in your travels, embellished or sensationalized by word of mouth. The game’s slow pace may alienate some players, but the narrative design and the mythmaking theme make it a truly unique work.

You Are Jeff Bezos

“When you wake up this morning from unsettling dreams, you find yourself changed in your bed into a monstrous vermin. You are Jeff Bezos.”  It’s the Kafkian opening of this viral gem by Kris Ligman. The text game asks you to quickly spend the 156 billion dollars that constitutes the wealth of Amazon’s CEO. You can easily end homelessness in the United States or fix Puerto Rico, but after that you are still drowning in money. Even when most of the wealth is spent, you realize you can still do an awful lot of good with very little change, like financing 100 indie games ($100 million) or adress the Flint water crisis ($55 million).

Of course the figures are rough estimates and much of Bezos’ wealth is congealed in stocks, warehouses, and market dominance but still, it’s impressive how a simple game gives us a way to understand astronomic numbers, and relativize problems that are routinely treated as unsolvable.

While the real Bezos invests in typical billionaire stuff, the rest of us can prefigure what could be done with that collectively created wealth, because you know, eventually we are gonna fucking take it back. 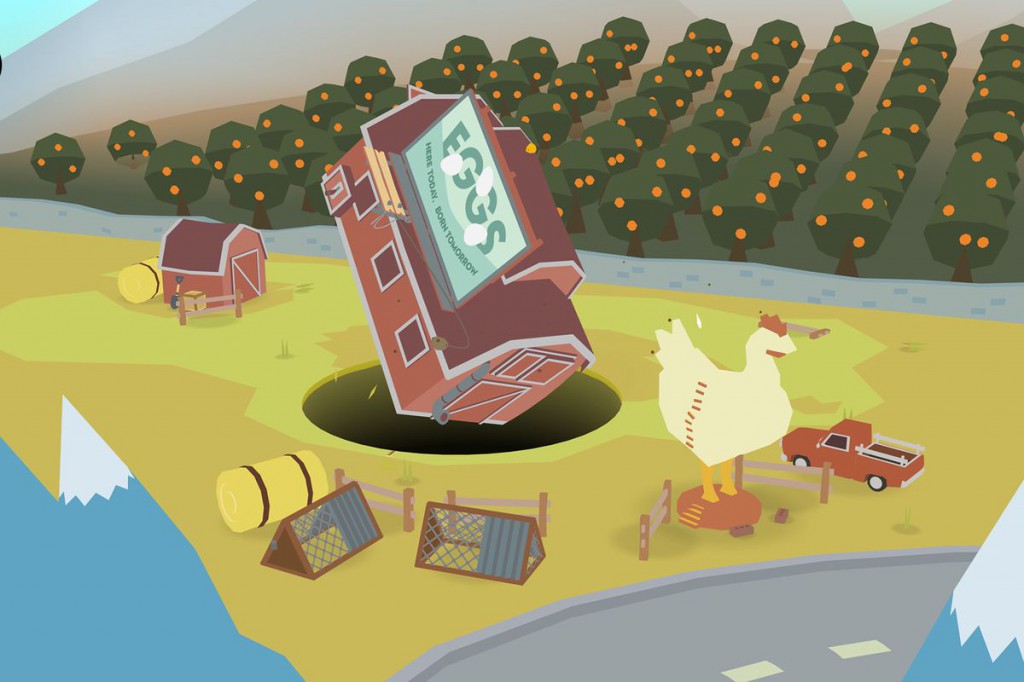 Donut County is a lovingly crafted physics puzzle in which you control a hole. The hole gets bigger as it swallow objects, people, and buildings, Katamari Damacy style. I admit I liked the nihilism of the original prototype, which didn’t explain much, but I ended up appreciating its narrative development even more. Donut County talks about Los Angeles and its gentrification, as well as the troubling power of tech companies. And if a high-tech hole swallowing LA sounds like a heavy-handed allegory, consider that’s literally what Elon Musk did last week. 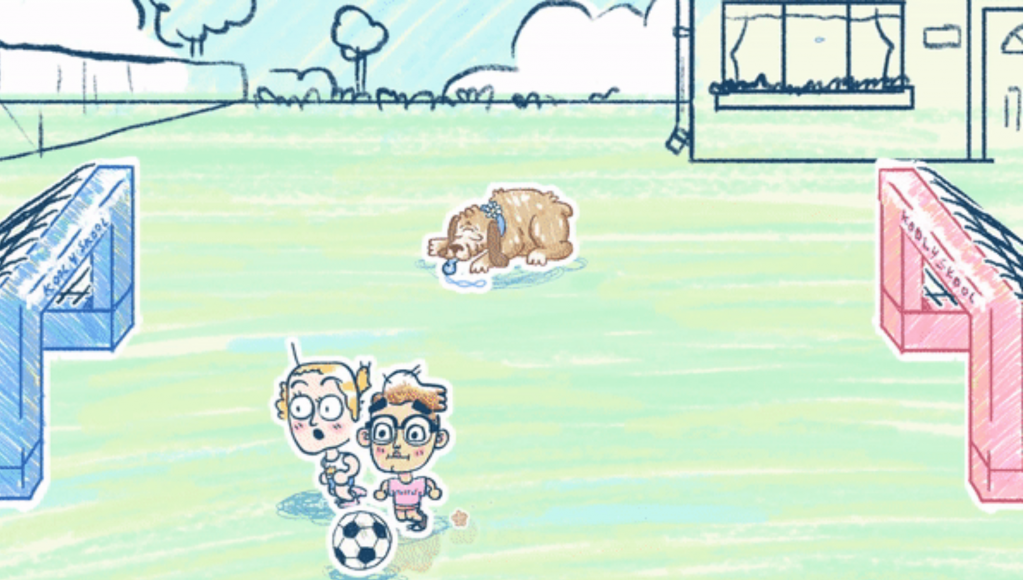 Grass Stains is a two-player vignette by Nina Freeman and friends. It’s a tiny soccer game that employs the single most brilliant mechanic of 2018. I won’t spoil it, but it reminded me of the teachings of play luminary Bernie Dekoven, who left us this year:

“There is a very fine balance between play and game, between control and release, lightness and heaviness, concentration and spontaneity. The function of our play community is to maintain that balance, to negotiate between the game-as-it-is-being-played and the game-as-we-intend-it-to-be. It is for that reason that we maintain the community. On the one hand we have the the playing mind – innovative, magical, boundless. On the other is the gaming mind – concentrated, determined, intelligent. And on the hand that holds them both together we have the notion of playing well”

The purpose of water – a mysterious, romantic puzzle. Increpare at its best.
Black Room – a feminist dungeon crawler, a collage, and a poem with an early net.art vibe.

Electric file monitor – an antivirus/oppressive prison system for your desktop
Cultist simulator – a narrative solitary game so esoteric that it’s unclear whether it’s you or the design that is failing.
Pool Panic – a stylish and anarchic arcade pool.
The Earth is a better person than me – the planet earth is an ideal lover in this post-human dating sim.
Don’t Trip a literal walking simulator that truly takes advantage of the affordances of a smartphone.
Gris – smooth, journey-like puzzle-platformer themed around sadness or emotions or whatever. A new high mark in art direction.