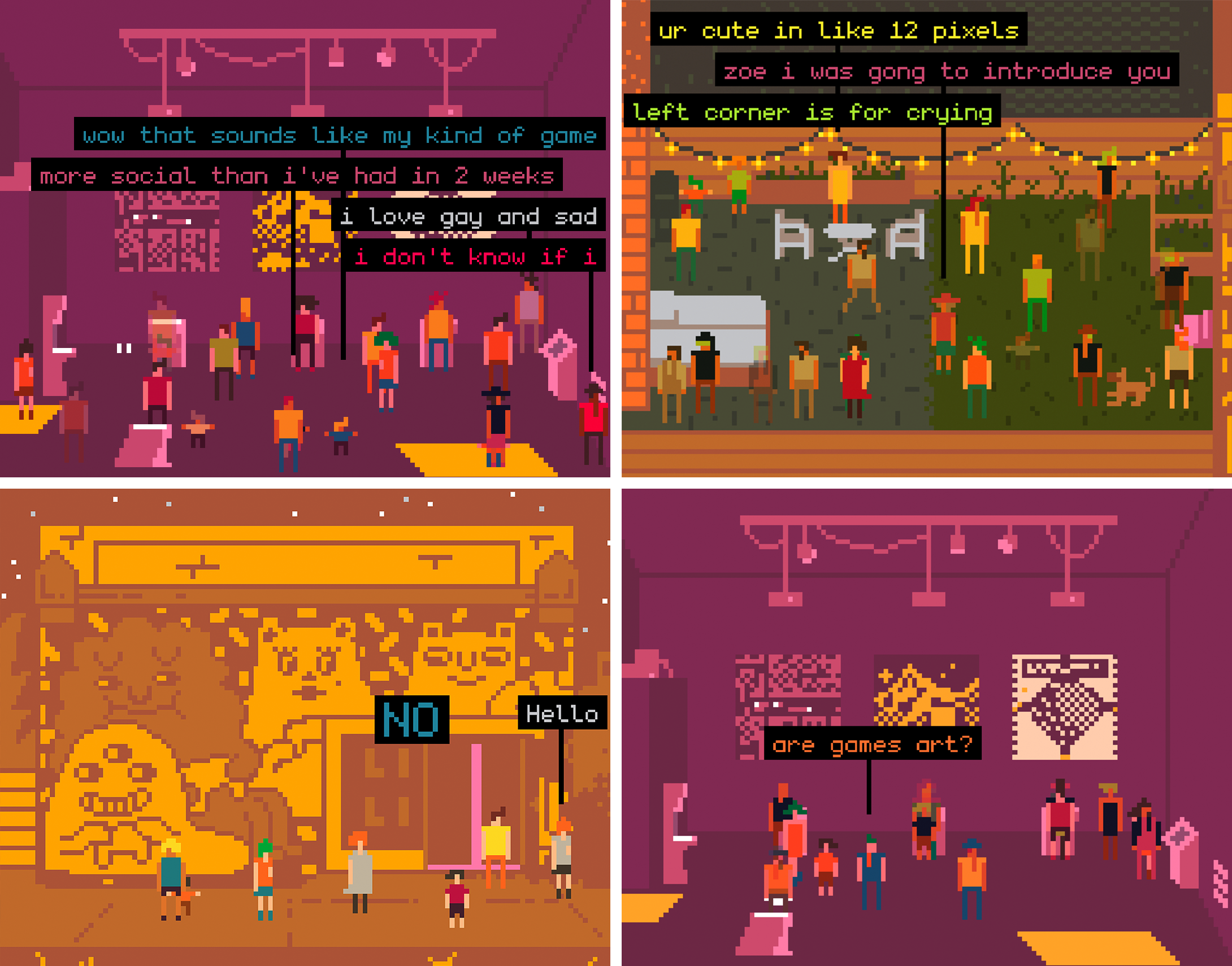 LIKELIKE, the little game space I run with some friends in Pittsburgh, suspended all programming due to COVID-19. The pandemic is going to have long lasting impacts on the world economy; millions of Americans are suddenly unemployed and entire industries came to a standstill. It’s not a great time for event organizers, but in gaming and art+tech communities we are relatively lucky due to our familiarity with remote practices. While normies scramble to set up Zoom accounts, many of us have been involved with streaming culture or online games for a long time, and embraced extremely online, borderline hikikomori lifestyles even before the quarantine. So it’s not surprising to see game people already experimenting with social distanced formats in education and art events.

I fundamentally loathe the now pervasive wecam aesthetic, so I decided to create a low-res multiplayer environment that attempts to capture some of the social component of LIKELIKE events. LIKELIKE Online is the most literal MMORPG ever: you dress up, check some games, and chat with friends and strangers in a small space. The opening night was loud and crowded, on weekdays it’s more chill and gallery-like. There is really not much to do and the conversations, mostly small talk, have an early-internet chatroom quality.

All the exhibited games are made in bitsy, and more or less obliquely deal with the theme of crisis. Bitsy games tend to be quiet and intimate, and can be challenging to play at noisy events, so this was a good chance to show something that wouldn’t quite fit in the physical space.

Two weeks after the opening, LIKELIKE Online “gentrified” and opened a new wing: the online Museum of Multiplayer Art. The oMoMa is made of nine playful environments that, quoting the press release “interrogate our notions of mediated sociality and digital embodiment. The virtual installations, operating at the intersection of art and technology, draw from the tradition of experimental chats, net.art, conceptual language games, and online roleplaying worlds.”.

The oMoMA is a both a tongue-in-cheek response to the forced virtualization of the art world under COVID-19, and a contribution to the genre of virtual museums. Virtual museums generally transpose all the signifiers of modern art institutions (white walls, architectural extravagance, overwrought curatorial statements, monumental installations…) into 3D game engines. Whether solo efforts or collaborative endeavor, they tend to be made of mostly static, non-interactive environments – the implication being that art is something to look at, or to walk through.
With the oMoMA I wanted to create playful spaces that reproduce the social dynamics of exhibition spaces while leveraging the peculiarity of mediated spaces. There is not much to see at the oMoMA: all the installations require having conversations with other users. Some “pieces” go entirely unnoticed by lonely or shy visitors.
Most of the rooms encourage subversive play and revolve around client-server power relations. Whereas traditional multiplayer games attempt to distribute an “objective” reality to all players, the oMoMA plays tricks on its visitors, manipulating what they say or how they look.

The oMoMA was also an excuse to add a series of modding features to the original codebase. It is now possible to add room-specific behaviors on both server and client side without touching the engine.

LIKELIKE Online is open source and easily remixable on the Glitch platform. You can create your own little spaces or use it as a template for online games and multi-user environments.
Source on github
Project on Glitch