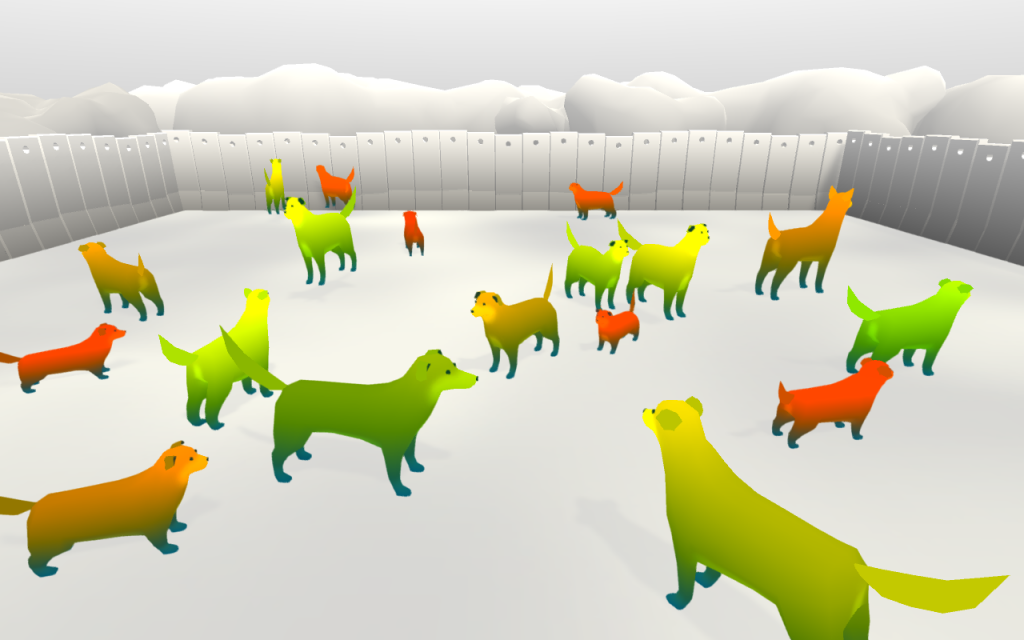 How would we sort things out? Canid, hominid; pet, professor; bitch, woman; animal, human; athlete, handler. One of us has a microchip injected under her neck skin for identification; the other has a photo ID California driver’s license. One of us has a written record of her ancestors for twenty generations; one of us does not know her great grandparents’ names. One of us, product of a vast genetic mixture, is called “purebred.” One of us, equally a product of a vast mixture, is called “white.” Each of these names designates a different racial discourse, and we both inherit their consequences in our flesh.

Yesterday I released Dogness, a game in which you to have to create a the most “perfect” and homogeneous dog park. The perfect dog is randomized every time, and it is quite challenging to create a population that approximates the ideal. It involves controlling immigration, expelling the “unfit” dogs, and selectively breeding the animals to preserve or achieve the desired traits. The traits are determined by four “genes” (size, build, height, and color). The offspring tends to look like the average of the parents with some added randomness. The genetic engine is extremely simplified for playability: there are no dominant or recessive genes and the sex of the parents doesn’t matter, anybody can mate with anybody. However, puppies can come out stunted if they are forced to mate with close relatives. At the end of each 6 minutes section you are evaluated based on the moving average of your population’s Dogness. A Dogness of 70% or higher is a good score.

Dogness was meant to be a submission for #resistJam, a friendly competition calling for games that “resist oppressive authoritarianism”. The game itself was pretty much done a year ago but it took a looong time to find the willpower to complete the UI.

The game is obviously a direct response to the resurgence and normalization of white supremacy in the Trump era, but I was going for something a bit more complex and open-ended than a satirical allegory.

I’ve been looking at the relationship between eugenics and dog breeding, and how they support and undermine each other. Humans have been breeding dogs since forever for utilitarian purposes (in fact we likely adopted and domesticated each other), but the crystallization of breeds and the obsession with pedigree only happened at the end of the 19th century with the creation of Kennel Clubs. That’s around the same time eugenics was introduced by Francis Galton, Charles Darwin’s problematic cousin.
Galton’s starting point for eugenics was the domestication of animals and he often referred to dog breeding to support his theories. The dude spent an awful lot of time trying to find biological justifications for social inequality, and therefore was well loved by rich people and British aristocrats.
Eugenics and dog breeding shared the same language and misconceptions and provided a pseudo-scientific backing to racist ideologies: the idea of blood purity, mongrelization as dilution of desirable traits, biological reductionism, and so on. Consider how during the golden age of eugenics in the United States there were societies promoting “fittest family” contests similar to dog shows.

Recently there has been more awareness of the problematic aspect of purebred dogs. Breed standards are creating increasingly unhealthy animals, and calls for the ban of “puppy mills” are becoming more frequent. However, at the same time, we are seeing a resurgence of xenophobic groups recuperating these discredited theories (of course proper neofascists would pedantically argue about all their different flavors of shit: how white supremacy is not white nationalism, how some of them may not deny holocaust and what not, but it’s really not worth getting into details).
Anyway, the game is available on itch.io as Pay What You Want and it will officially premiere at the next LIKELIKE show along with a bunch of amazing dog-related games.