Arcade Bike Polo was created for Fuck This Jam, a friendly game making competition organized by Vlambeer‘s Rami Ismail & Panoramical creator Fernando Ramallo. Gameplay and graphics were completed by the end of the week-long jam but I decided to take some extra time to add sound, menus and other non-core features.

Fuck This Jam challenged creators around the world to make a new game in a genre they hated. From the call:

Through utter ignorance for conventions and hate for the established rules of a genre, beautiful things will happen.

Although beauty has never been and will never be a priority a for Molleindustria, parodying/subverting the most obnoxious game genres (management sims, fighting games…) has been a recurring strategy since the inception of the project.
This time around I wanted to try a more direct approach and make a straightforward sport game. Not a stylized, natively digital multiplayer game like the Sportsfriends ones (that’s definitely not a genre I hate) but instead a digital translation of an existing sport. 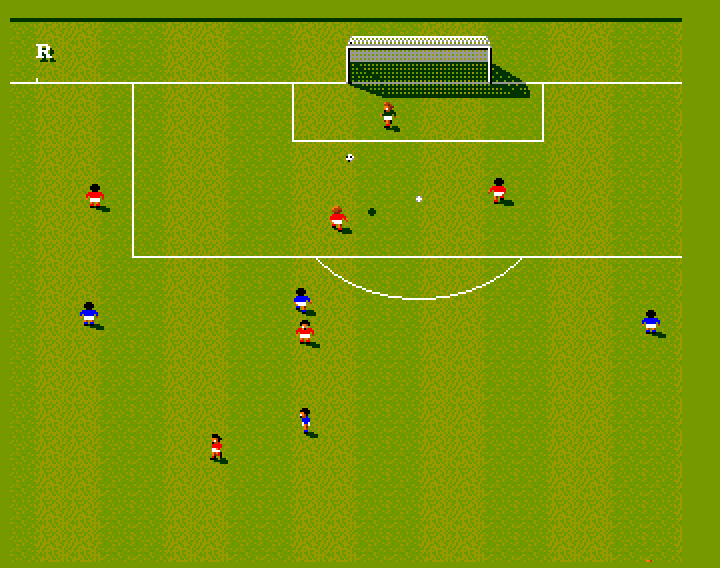 The main inspiration for Arcade Bike Polo is Sensible Soccer, a frantic, streamlined and rather hardcore Amiga title from 1992. Sensible Soccer was a product of that awkward period of gaming history suspended between the symbolic/iconic age (i.e. pong) and the forced march toward photo-realism starting from the mid-nineties.

The choice of Hardcourt Bike Polo was obvious since it’s pretty much the only sport I’ve ever liked (full disclosure: I’m a terrible player). Moreover, Bike Polo is still not contaminated by rampant commercialization, exploited by cool hunting marketers, nor dominated by jock culture. On the opposite, it’s strongly connected with bicycle advocates, it’s decentralized and permeated by a DIY/punk(ish) attitude.

The beauty of Bike Polo is in being both elegant and messy at the same time. At first it may appear as a dangerous, clanging wreck of wheels and ski poles, but then comes the realization that hitting a small ball with a section of ABS pipe while riding a bike is not any more absurd than running around bouncing a basketball: it’s just a series of artificial constraints from which patterns, tactics and strategies emerge.
I wanted to create a videogame that, without any pretense of simulation and “realism”, captured some of the core dynamics of the sports. Namely: the fluidity of action resulting from the lack of fixed roles and from the bikes’ affordances (you can’t instantly stop and change direction), and the asymmetry created by players with one strong side (the one with the mallet).

Some crucial aspects like collisions, wrecks, and “dabs” are intentionally downplayed or removed to produce a more fluid gameplay. A real-life polo game tends to have a hobbling kind of flow, with frequent pauses charged with tension, and sudden breakaways; mallet-to-mallet contact (sword fight) is common and frenzied; players get constantly cornered to the side of the court. These are characteristics you won’t find in the game.
Those familiar with bike polo will notice some other artistic licenses: the court is over-sized, there’s no distinction between “hit” and “shuffle”, it’s possible to ride through the goal backward and then score, and so on… each of them would require a justification I’d rather spare you.

I hope this silly videogame will introduce Bike Polo to a few uninitiated.
If you are one of them, trust me: the real deal is much more fun.
Chances are there is already a bike polo club in your own town!