2013 has been not only a great year for independent games but possibly the first year in which many excellent independent titles have been recognized by mainstream gamers and press. Mature and meaningful works like Kentucky Route Zero, Papers please, the Stanley Parable and Gone Home are in many “Games of the Year” lists along with oddities for game connoisseurs like Michael Brough’s Corrypt and 898 Hack.
Instead of reiterating the critical consensus, I’d like to highlight some more overlooked works from this year, of course paying special attention to social commentary.
In no particular order:

Thanks to a new generation of game journalists and critics, the issue of representation of women in games (and by extension in the game industry) is frequently a subject of intense debate. We’ve seen the rise of a queer game movement/community and plenty of conferences and articles devoted to the issue, but I feel like Lea Schoenfelder and Peter Lu’s upcoming work may be the first openly and confidently feminist game I’ve ever played.
It’s also the first game that employs the Kinect for what it is: a device for the cybernetic control of bodies. There’s a dark disciplinary aspect in all seeing technologies: dancing and exercise games popularized by Kinect are not encouraging physical expression but rather assessing the quality of the movements, comparing them against an arbitrary “ideal” model established by the developers.
The Perfect Woman turns this technological bias into a satire of gender roles. Your goal is to contort and literally bend backwards to conform to society’s expectations, advance your “career” enduring brutal cutscenes, and crash against the glass ceiling represented by an absurd difficulty level.
Website (Still in development, being shown to festivals)

An unconventional and strangely addictive gamification of Google Street view. You are “teleported” to a random location in the world (within a large but curated list) and you have to guess where you are only from the information captured by Google’s cameras. It’s easy to cheat by reading signs, more interesting to play in good company, just by feeling the distinctive vibe of so many non-places.
Play Online 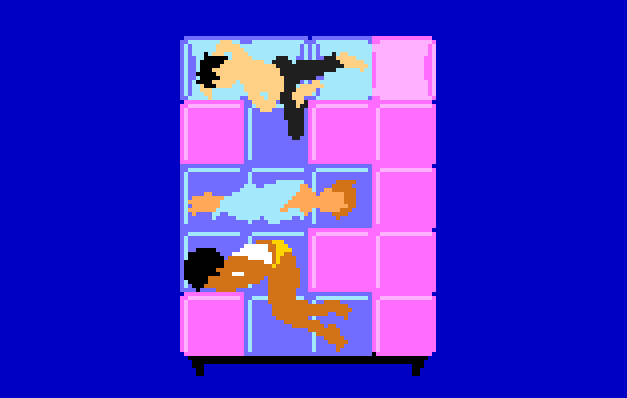 This short puzzle by Anna Anthropy and Leon Arnott may be reminiscent of Anna’s breakthrough zine-game Dys4ia due to the visual style and the intimate subject matter, but this time the gameplay is more central. The goal is to fit 3 Tetris-like characters in the same bed taking into account their peculiar sleeping habits. Triad may just be an ephemeral work like a diary entry, or a game about the logistics of polyamory, or about the struggle to accommodate queer bodies into limiting structures, or it could simply be about sharing an apartment during times of financial distress. In any case, it masterfully conveys a sense of solidarity and tolerance: we can all fit in without compromising what we are, it only requires some lateral thinking.
Free download 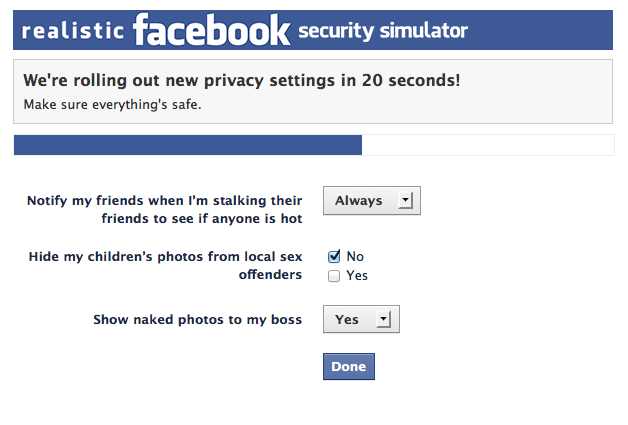 A common problem for game makers addressing current affairs is development time. Making a game still takes longer than writing an article, shooting a video for a newscast, or drawing a political cartoon. Realistic Facebook Privacy Simulator proves that it is not always the case. Simple and effective, made right in time to participate in a conversation about privacy and social networks. Aside of the relatively trivial subject matter – compared to NSA’s systematic abuses, for example – it works as a sharp commentary on the economics of sharing in general (the information you share is Facebook’s main asset) and the subtle manipulation of users’ behavior happening through interfaces.
Play online 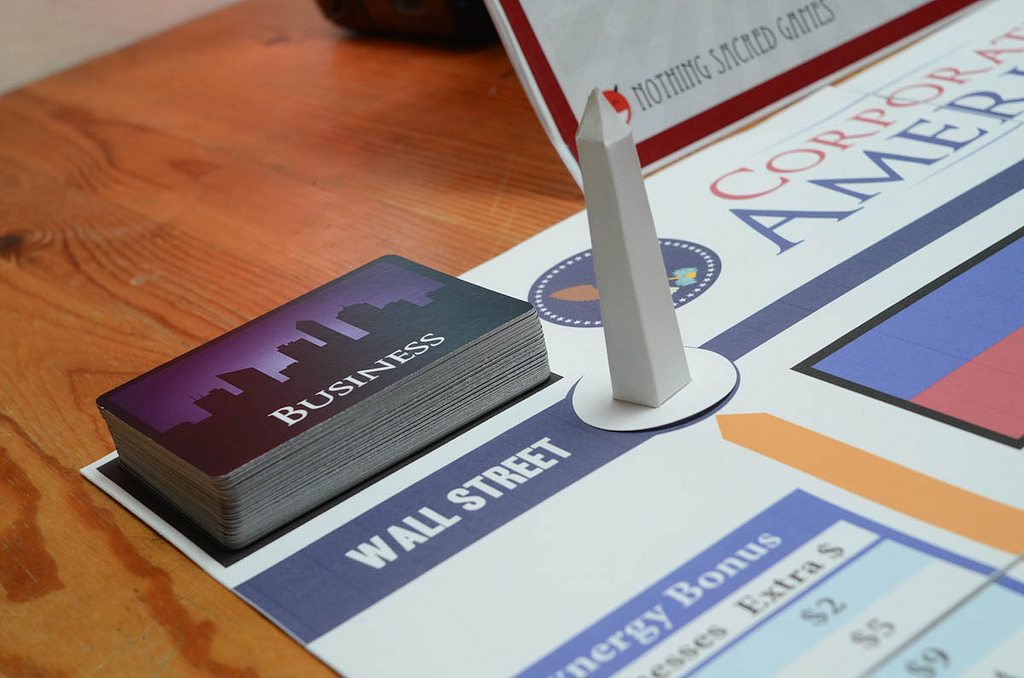 Corporate America is undoubtedly the best satirical board game since Terrorbull’s War on Terror. Beautifully produced, easy to learn and fun to play, it manages to distill the interplay between corporate power and politics into an elegant gameplay. It combines investment portfolio mechanics (think Settlers of Catan), with rotating roles (popularized by games like Puerto Rico), but its true strength is in the constant negotiation and bribing happening between players – an aspect that very few digital games succeed to implement. Great family entertainment, perfect alternative of the tired and juvenile Cards Against Humanity.
Website 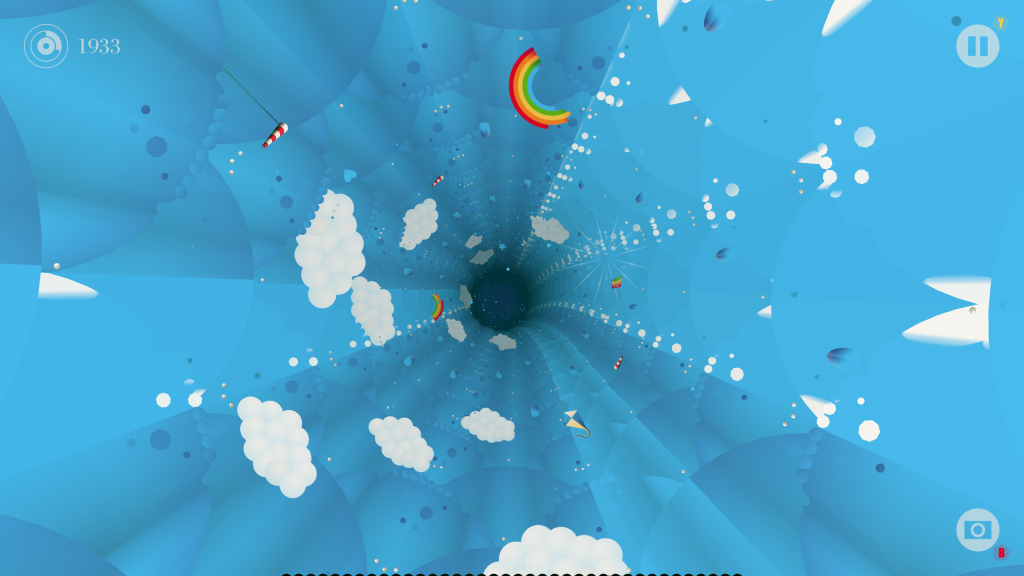 I’ve been looking into sex games for a long time, made prototypes that I never completed, and spoke about the challenges of representing the intercourse in a playable form.
The latest Tale of Tales game succeeds spectacularly where so many have failed: it’s a sex game that doesn’t rely on text (too easy…), that is sex positive, non normative, and simply beautiful.
Luxuria Superbia is based on a sort of tunnel-vision wack-a-mole gameplay where players engage in an intercourse with an undefined entity, possibly the technological device itself, trying to modulate the intensity of the stimulation and spending some time “edging” (almost like an inversion of my old Orgasm Simulator). Inside the “flower” colorful icons pop up, sometimes they reinforce the sexual innuendo, sometimes they seem to point at the cultural baggage that comes with the act of fucking (church – bells – marriage).
The simplistic gameplay may… turn off some gamers but that’s the case for most ToT not-games. From what I’ve read, Luxuria elicits the most diverse reactions: some people find it sexy, some people find it creepy, for some other it’s just plain boring. It could just be a reflection of the variety of tastes, expectations, and projections people have when it comes to sex. After all, not everybody will be into Consensual Torture Simulator either.
Website 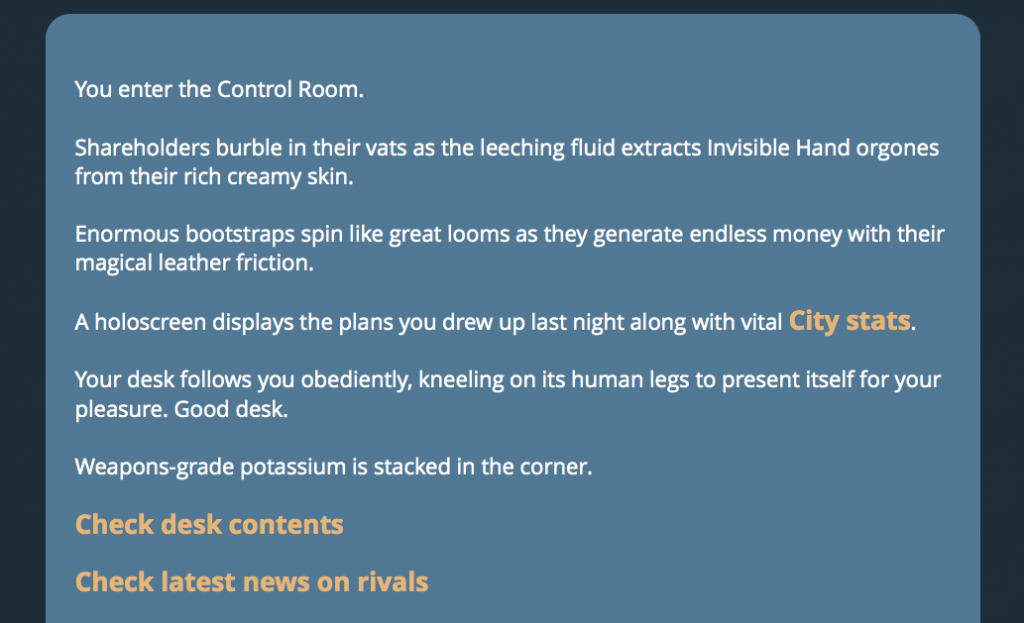 Porpentine is the best catastrophe that happened to text games in a long time. The horde of Twine games she unleashed in the span of a few months have established a sexy, post-human, feverish, sci-fi multiverse that may just be too vast and too overwhelming for our feeble minds.
Ultra Business Tycoon III is a solution to this conundrum, it speaks the familiar language of our corporate overlords, and thus it can be a Perfect Rabbit Hole. What the game is, or can be for you, is hard to describe: language and hypertextual structure are stretched to the limit to induce a state of mind between ecstasy and WTF; but despite the frequent digressions and meta-play jumps, the story revolves around a surprisingly coherent core. If you ever wondered what is the dark viscous matter that constitutes our Late [Too Late] Capitalism, this is the game to play.
Play online

One of Pippin Barr’s most celebrated works is a simulation of the experience of waiting in line for Marina Abamovic’s retrospective at the MoMA – an enduring performance required to participate to an enduring performance. It even spun-off into an official game, part of the artist’s metamorphosis into human Internet meme / self-made institution.
Pippin’s Art Game however goes a step beyond specific high-culture references and attempts to simulate the artistic process itself, as a game within a game. It’s a lot of fun, somewhere between satire and institutional critique. Most importantly, it managed to conquer the first result of a Google search for the term “Art game”, something that should be seen as the ultimate resolution of the “games as art” debate.
Play online