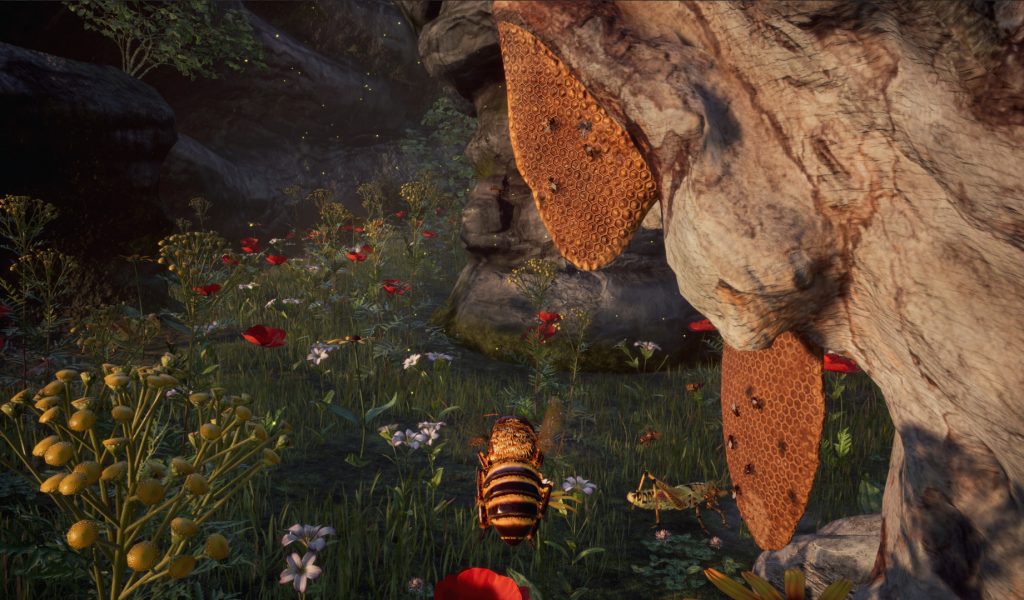 Bees, particularly honeybees, are often incorrectly characterized in videogames – as well as in other media. Sometimes that’s due to their similarity with with the more aggressive wasps (which make for better enemies), sometimes that is due to the alien-like complexity of their social behavior, sometimes the creators are interested in bees only beecause they allow a multitude of puns around on the letter B. Hilarious.

The threat of Colony Collapse Disorder and the alarming decline of wild bee species has brought an unprecedented mainstream interest around the fuzzy pollinators, which in turn spurred a wave of bee-themed indie games. As an amateur beekeeper, semi-professional game designer, and generally pedantic person, I decided to play all the games I could find on the subject and rate them according to their “realism”. The rating goes from one (⬢⬡⬡⬡⬡) to five (⬢⬢⬢⬢⬢) honeycomb cells.
I intentionally avoided all the games in which bees are completely anthropomorphized or function like a spaceship, and games in which bees play a secondary role. I did include short and semi-abstract games when they referenced the bees actual behavior. Realism is not a matter of visual definition or sheer procedural complexity. In my view, even a tiny game can capture something compelling about this fascinating insect. 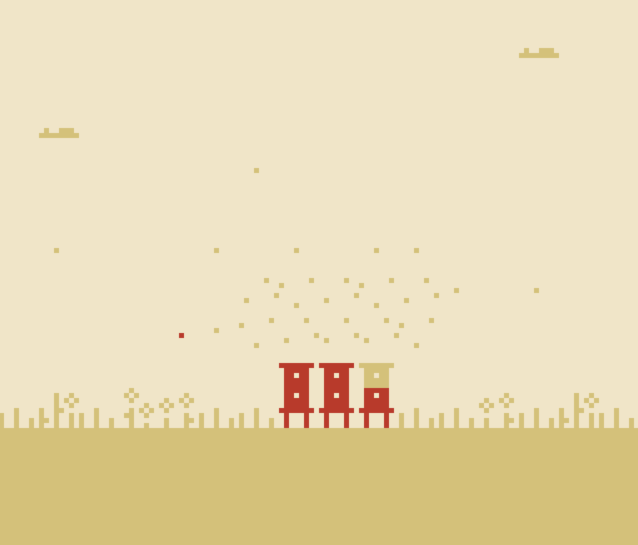 Cute bitsy game. Accurate in the portrayal of an individual bee’s insignificance. Big plus for showing langstroth hives and not the iconic and obsolete conical skeps.
Issue: smoke shouldn’t make bees sleepy, in reality it disrupts their pheromone alarm system, and tricks them into gorging with honey in preparation of a possible evacuation due to fire.
⬢⬢⬢⬡⬡

The first and only game that simulates the method used to find feral honeybee hives. The rigorous simulation is integrated with delightful story bits. The Citizen Kane of beekeeping games.
⬢⬢⬢⬢⬢ 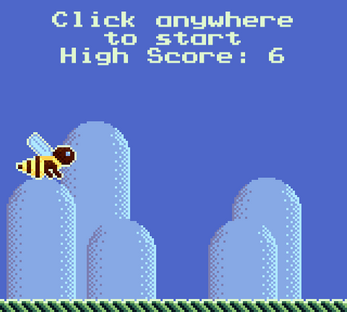 Clever variant of flappy bird in which you have to graze over obstacles to collect pollen.
Issue: bees don’t flap that way.
⬢⬢⬡⬡⬡

Bees in a Pod 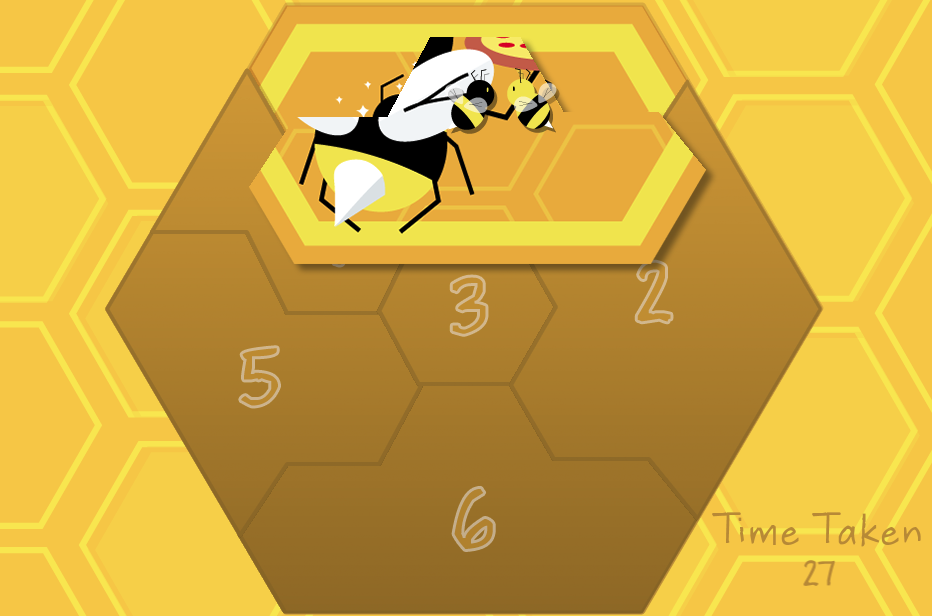 A series of coordination minigames for two players. Presumably the bees were chosen as emblem of co-operation and visual motif. Missed opportunity.
Issues: the game depicts bees as eating pizza and controlling a mecha: wrong!
⬢⬡⬡⬡⬡

A Queen and Her Hive 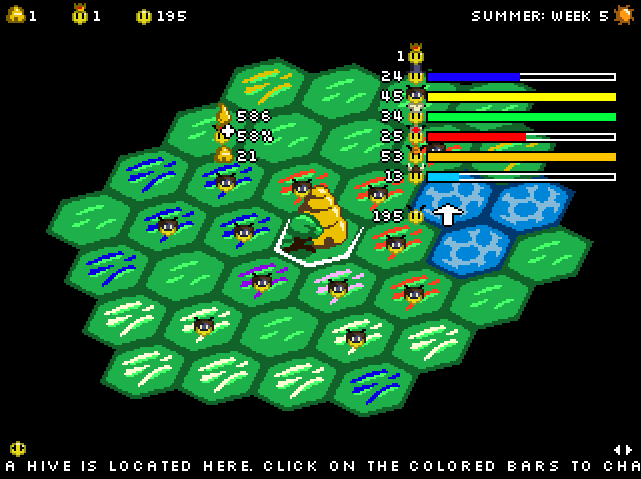 Ambitious albeit cryptic civilization-building game. As a queen you have only indirect control over the colony, mainly affecting the demographics. The bee roles are a slightly off, but not completely.
Zombies are present in the game, which I interpret as humans.
⬢⬢⬢⬢⬡ 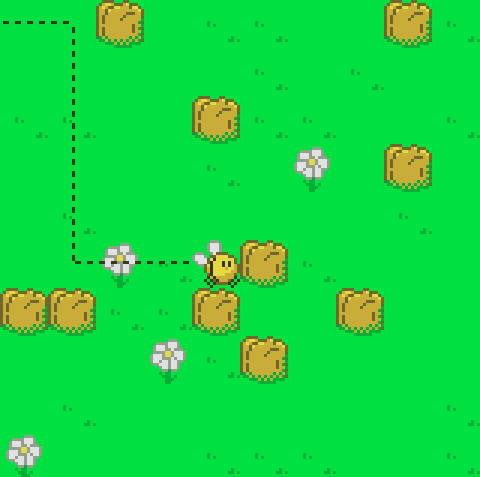 Cute puzzle in which you have to find a path to all flowers in a grid system. It’s arguably too abstract to rate, but it raises the question of what a gameplay based on foraging flight path would look like. Honeybees tend to explore their surrounding in curved paths and then fly back to the hive in straight lines, which suggests the ability to create sophisticated mental maps[1]. They also appear to have different personalities and predisposition toward exploration[2].
⬢N/A 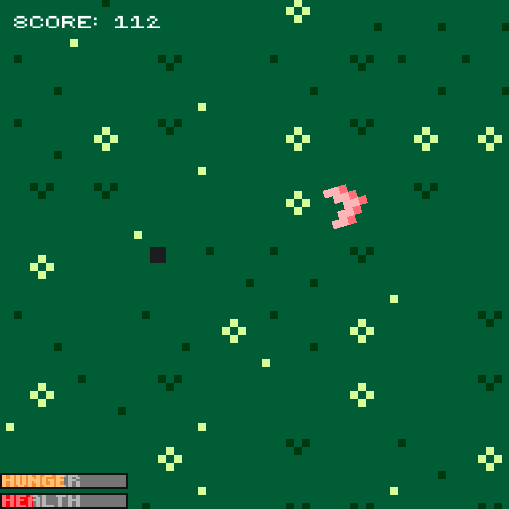 You have to collect pollen and take it back to the hive. The hive grows and demands more. Keep collecting until you die. Quite accurate.
Issue: the player bee seems to operate in solitude. Perhaps it’s just an extremely subjective view and she is just ignoring the other foragers.
⬢⬢⬢⬢⬡ 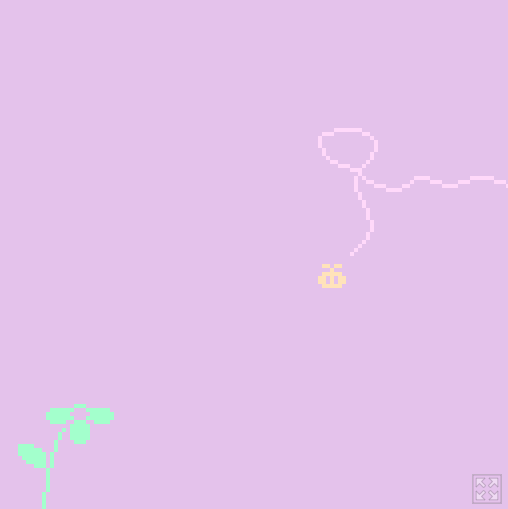 One Bee at a time 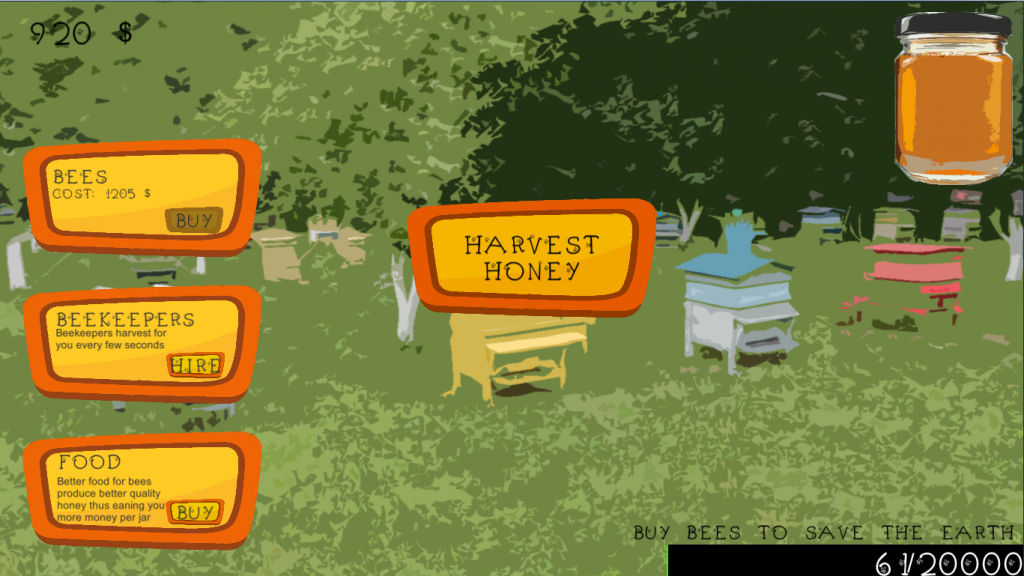 https://raulr.itch.io/one-bee-at-a-time – Windows
Beekeeping is an endeavor with very limited agency, so portraying through an idle/incremental game is not necessarily a bad idea.
Issues: the capitalist trappings of the genre are not sufficiently reimagined. One bee at a time forces you to “buy food” for the bees such as pollen nectar or royal jelly in order to increase the profit per jar.
⬢⬢⬡⬡⬡ 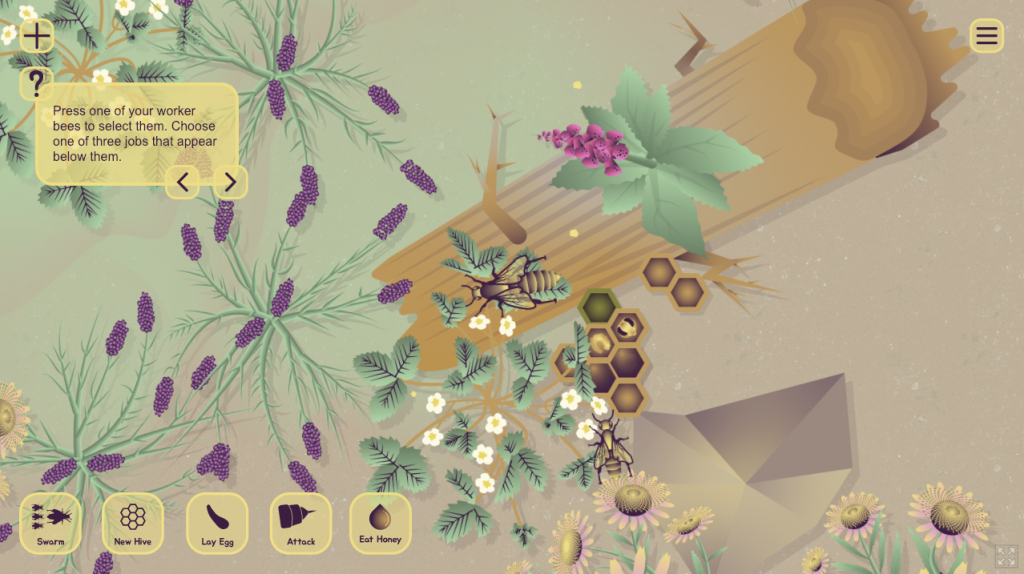 A multiplayer real time strategy game. As a queen bee you have to build a hive, lay eggs, and assign roles to each bee, as well as defending the colony from hornets and other colonies. The roles (forager, nurse, builder, queen) are surprisingly accurate although in real life they happen at different stage of development of a single bee. The graphics are anatomically correct, which is extremely rare across media. Even more notably, the workers operate autonomously and attacks are launched indirectly trough danger pheromone. A bit clunky but remarkably faithful.
⬢⬢⬢⬢⬢ 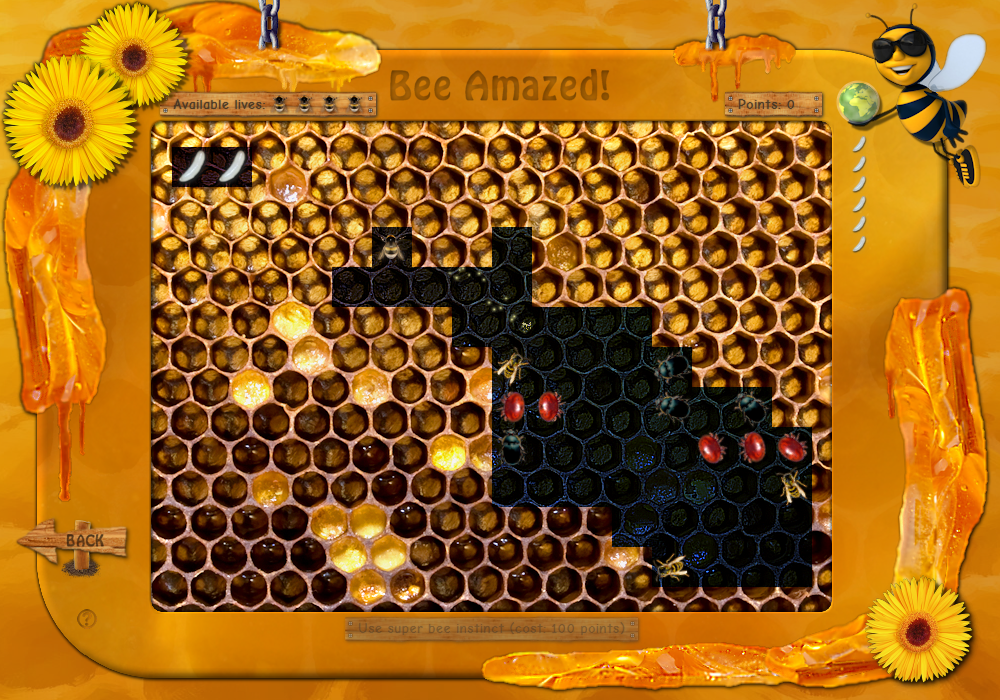 An old-style educational game that conveys basic facts about the danger of pesticides and varroa mites through minigames and quizzes. Unfortunately the games are clones of minesweeper, matching pairs, or generic avoidance games.
Issue: The gameplay is completely unrelated to the situations it depicts, this disconnect has the overall effect of confusing the arguments.
⬢⬢⬢⬡⬡ 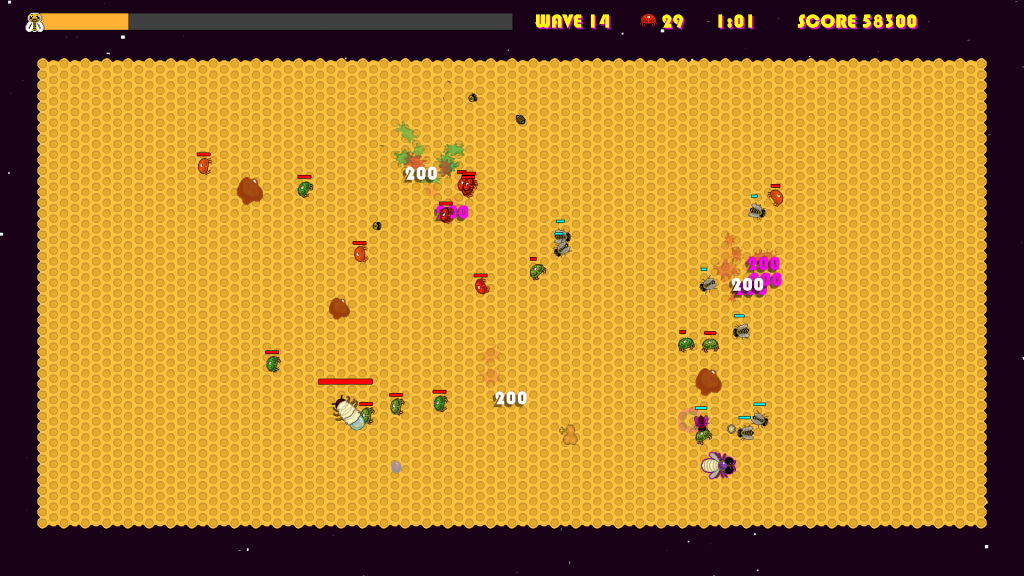 One should not expect too much realism from an arcade game, but this arena shooter with RTS elements is notable in its attempt to put you in control of a collective entity. Plus it’s one of the few games that displays anatomically accurate varroa mites, the most credible antagonist of the apis mellifera.
⬢⬢⬢⬡⬡ 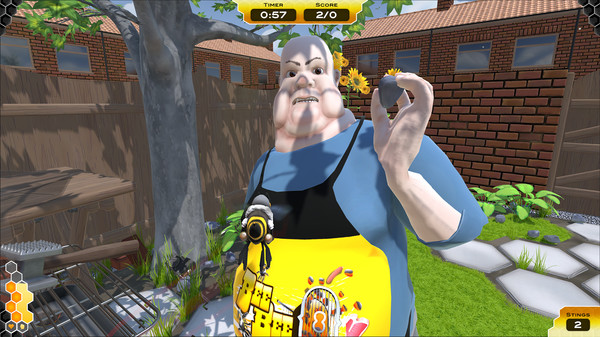 Interesting idea for an asymmetric VR multiplayer: one player controls the bee, the other is a human swatting around in VR.
Issue: Bee don’t eat meat, you are thinking of wasps.
⬢⬡⬡⬡⬡ 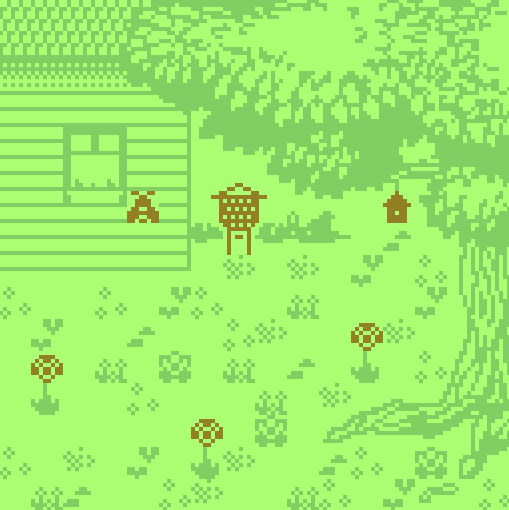 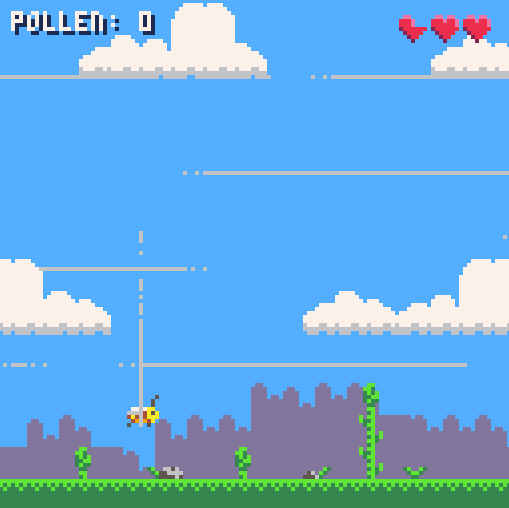 A game based on a fun, original control system. Exactly what you’d expect from Bennet Foddy, the creator of QWOP and Getting Over It.
Bees’ flight and landing maneuvers should be more precise and less fly-like, but the game implies strong wind so I guess it’s fair.
⬢⬢⬢⬡⬡ 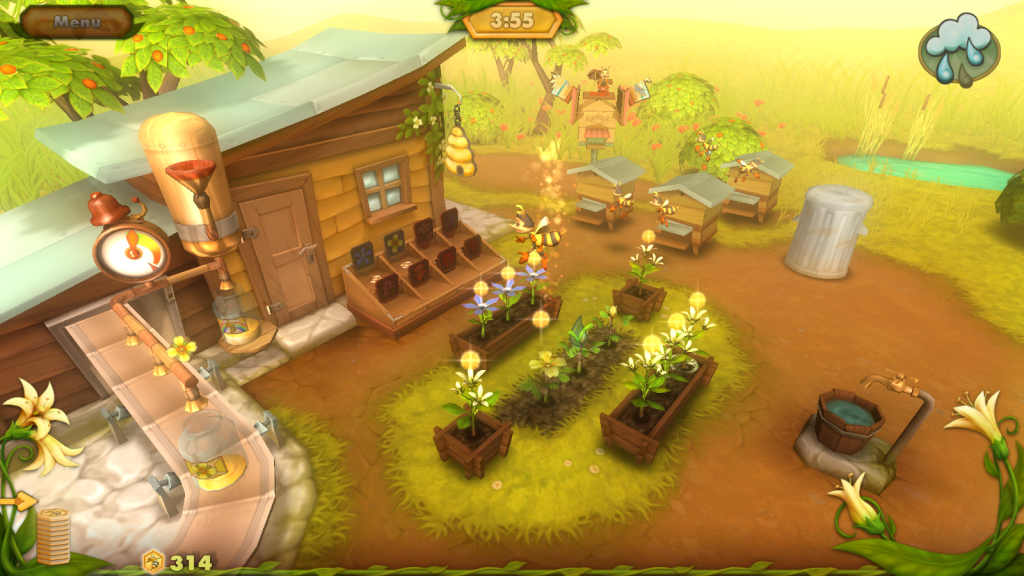 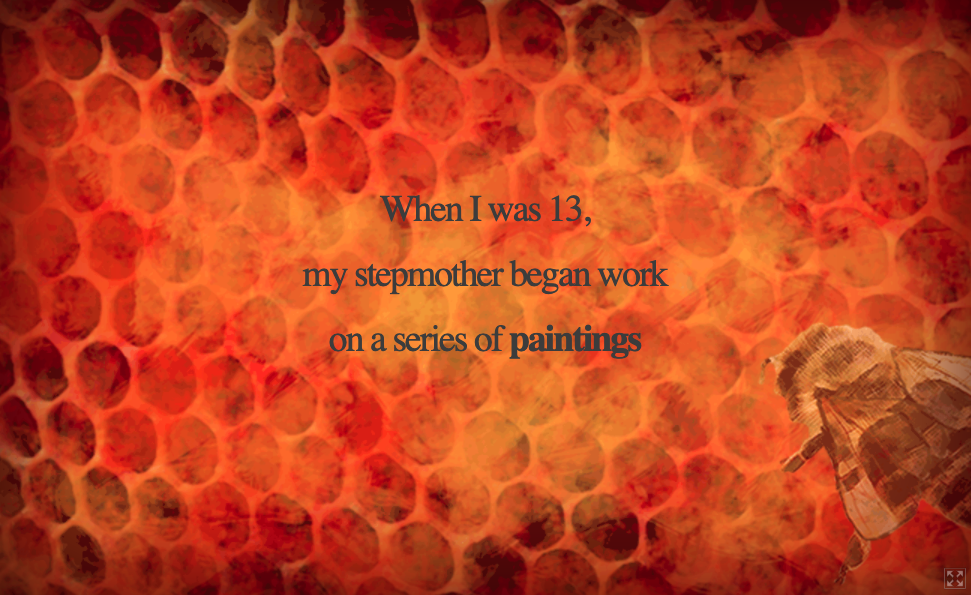 A beautiful animated poem about understanding bees in their own terms.
⬢N/A 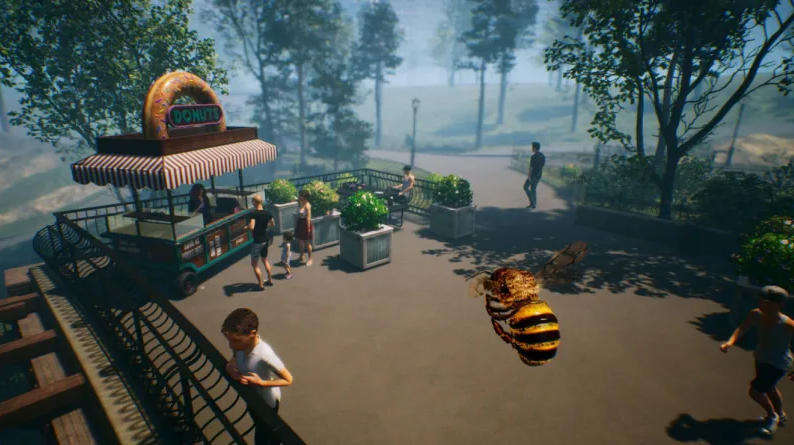 Without doubt the highest budget game ever made on the topic. The title can be misleading since it’s more of an arcade game. The story mode correctly points at the dangers of pesticides. The insects and the environments are beautifully rendered. The animated intro is delightful. Overall the Disney-esque cheerfulness of both soundrack and voice acting seems at odd with the brutal life of a bee and the often punishing difficulty level. My main problem is that everything in Bee Simulator is conservative and risk adverse: from the hero’s journey structure, to the fight scenes rendered through rhythm minigames; from the collectible “skins”, to the perplexing racing sections. We are still waiting for a bee game that attempts to build a gameplay around a non-human perspective like the Untitled Goose Game. Not quite the Bee Movie of videogames, but a missed opportunity.
Issues: collecting pollen and nectar is achieved by merely flying through a collider, there is a contrived hierarchy between common/uncommon flowers, the queen is incorrectly portrayed as ten times bigger than a worker, the waggle dance inexplicably happens mid-air and follows made-up patterns, the bee buzz is inaudible, and so on.
⬢⬢⬢⬢⬡ 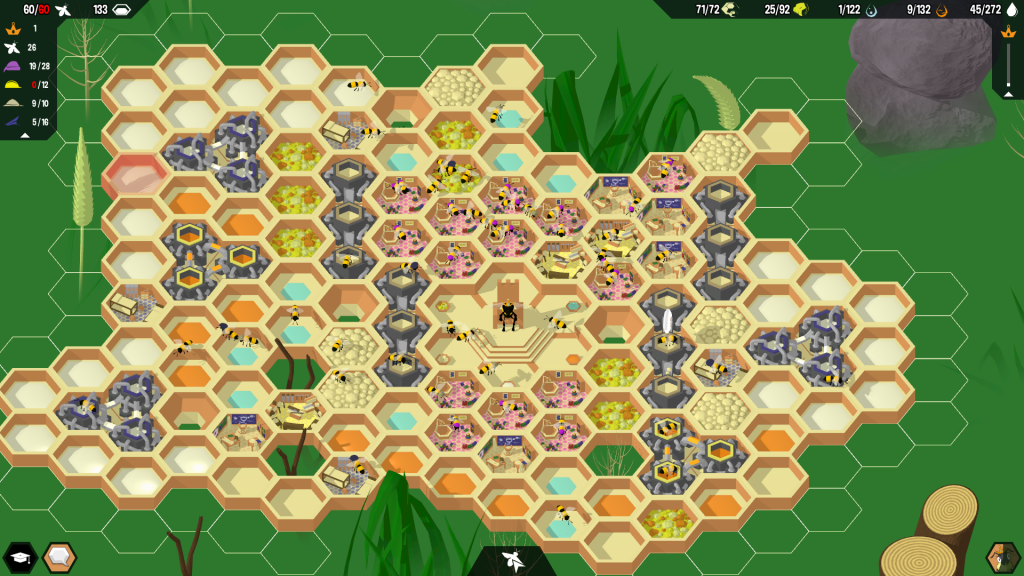 A cute and compelling management game. The types of resources are accurate: nectar, pollen, honey, wax, jelly, etc although their use is off. The goal of the game is to process an inordinate amount of royal jelly to produce a new queen before the current one dies. It would have been more realistic to cast it as a challenge to accumulate honey before winter (honey appears as a secondary, mid-game resource).
In the game, the processing of resources is externalized in industrial-looking structures, in accordance to the base-builder genre and the semi-anthropomorphized style. There are funny vignettes and external events, including a delightful case of Beetlemania.
The most interesting aspect of Hive Time is the statistical allocation of roles (nurse, forager, builder, etc). While not faithful to reality, it produces fluctuations in the bee demographics, forcing the player to constantly tweak the role sliders and the allocation of cells. To me, this kind of statistical awareness and search for homeostatic equilibrium is the closest thing to thinking like a superorganism or a beekeeper.