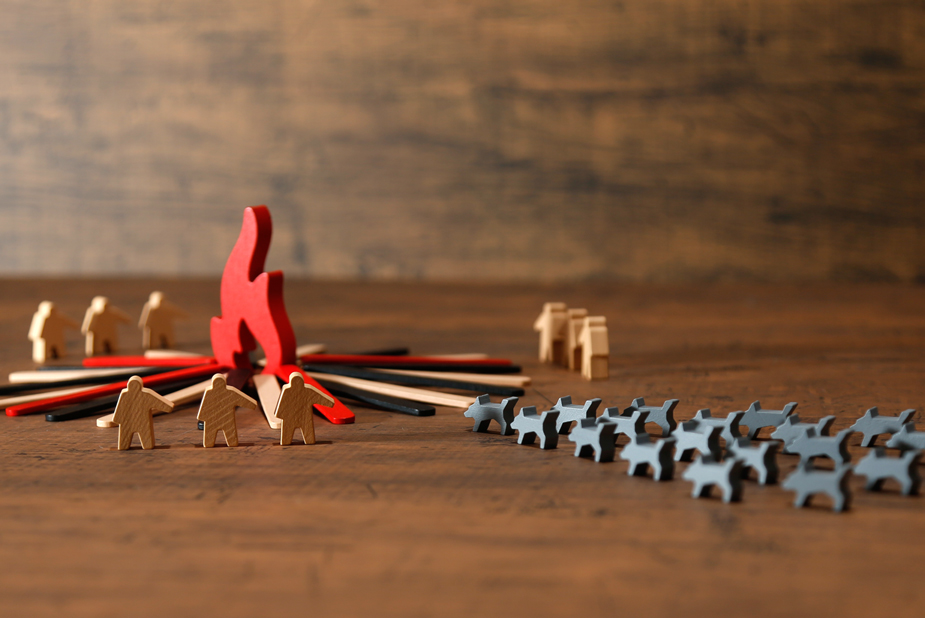 I’m a sucker for lightweight, elegant board games with unusual themes, so I was immediately intrigued by Here Comes the Dog by Itten. Unfortunately, this stylish little game about domesticating dogs turned out to be quite disappointing, if not fundamentally broken. I tried to rescue it with some house rules. This is a nerdy post, you should read it only if you are unhappy with the game or if you are planning to purchase it.

The rules of the second edition are available here and neatly explained in this video.

Amendments to the rules:

Ideally Here Comes the Dog is about managing risk. Meat sticks are crucial but also a liability when the wild dogs attacks. Unfortunately, Assault events by dice roll are very rare, and if one or two players pursue the obvious dominant strategy of maximizing meat or – when unavailable – fire, the Assault never gets triggered, because meat depletion will inevitably lead to a Feed event.

A risk managing dynamic may only happen when all players have an irrational fear of Assaults, collect charcoals, and turn it into a self-fulfilling prophecy. In some rare cases a griefing player may intentional want to trigger Assaults to undermine the meat hoarders, but they have nothing to gain from it. Even in case of an Assault, two meats sticks work as well as a fire+charcoal set, further devaluing the charcoals. If the value of resources is so clearly assigned and it is so rarely dependent on the game state, then the choice of what to pick after a dice roll is almost always a no-brainer: it is not an “interesting choice”.

Simply inverting the triggers makes things a bit more exciting since players have to be more careful about hoarding meat, and they collectively need to gather charcoal to cash in.

Sticks are taken from the bonfire in a “pick-up sticks” fashion. […]

This subset of rules turns Here Comes the Dog into a dexterity game. This major modification is optional and independent from the other rules listed here, but it was the only way I found to make the game compelling for two-players.

The Pick up sticks rules take advantage of the affordances of the game pieces (which are otherwise used as simple counters) and add some tactical contingencies: sometimes the desired stick is difficult to pick, the order of removal is something to be thought about, picking a certain stick may help the next player and so on. The most difficult pieces tend to be picked toward the end of the turn, when it’s being decided whether it’s going to be a Feed or an Assault event.
Of course, what constitutes an invalid move is a bit fuzzy and socially negotiated, but I don’t mind that aspect in table top games.

A Theft roll (three different colors) is resolved like a normal roll, allowing players to pick two sticks of their choosing.

Here Comes the Dog employs three three-sided dice (i.e. three standard d6 with three symbols repeated twice). If my math is correct, the Theft event has one chance in three to happen at every dice roll, resulting in players constantly stealing resources back and forth.
Essentially about one third of Here Comes the Dog is a chip-taking game, a textbook case in problematic game design. Avoiding targeted interaction is one of the pillar of euro-style board games, and for good reasons. In this case the constant thefts undermine any attempt to strategize over resources.

Exchanging sticks can end the round.

The original rule is confusing and easy to forget. Ending the round with exchanges increases their tactical value, and creates some good tension toward the end of a turn.

Fainting and reviving rules don’t apply: villagers irreversibly die. If a player runs out of villagers, they are out of the game.

This rule may not be strictly necessary, but the original fainting procedure is unnecessarily complicated. Villagers’ death turns player elimination into a serious threat, incentivizing the intentional triggering of Assaults, and making the game a more dramatic.

I haven’t extensively tested this mod, so let me know if you have any suggestions or variants. Here Comes the Dog is based on a brilliant concept, and its simple and abstract components are perfect for this kind of design exercise.